Merchandise Can Take Over Your Life

The past two years were filled with firsts for me whether it be discovering really cool Japanese bands, watching an anime film in a theater for the first time or even becoming a writer on another blog. One of my favorites “firsts” that I experienced in the past couple of years was buying anime/Japanese culture merchandise for the first time and actually importing things from Japan. I always thought importing was a pain in the ass (it is a little) but overall, it’s actually not that bad/frustrating.

After being inspired by one of my good friends Shokamoka and his past blog post featuring the anime related merchandise he bought, I would like to do the same for you guys and uhm… just don’t ask how much I’ve spent on all this stuff, okay? 😛

Figurines are something I would buy more often but with the lack of space in my room, as well as how expensive these can be, I simply refrain from buying them. They’re cool and all and there are a few characters that I would happily buy (a Nadeshiko Nendoroid, yes please) but you really need to be rolling in a good amount of money if you want all the ones you desire to have.

With me, I just simply have one figurine, it’s of Watanabe You from Love Live! Sunshine!!. I actually remember the day I got this, it was when I finished sophomore year of high school. I just wanted to get myself a little something special for finishing the school year, and who else would it be than a top tier waifu. 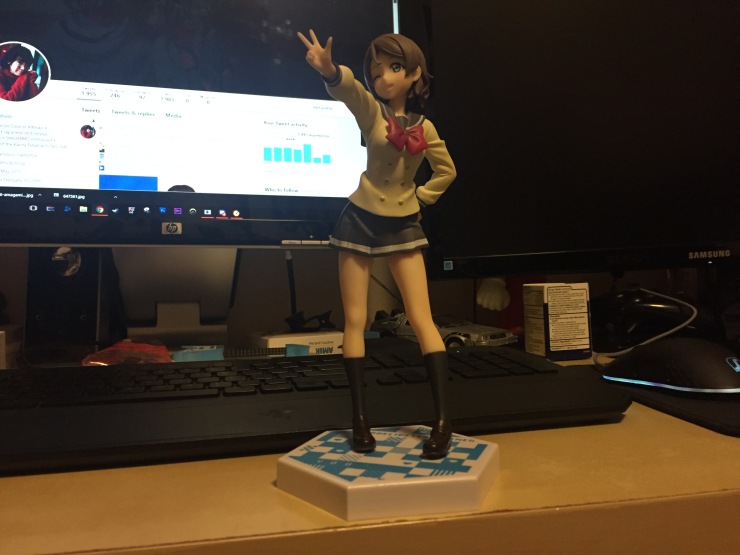 Other than You-chan, if you want to count Nintendo’s brilliant marketing plan of selling figurines to kids and adults alongside their video games, I have a few amiibo in my arsenal. The Captain Falcon one is probably my favorite out of all of them. 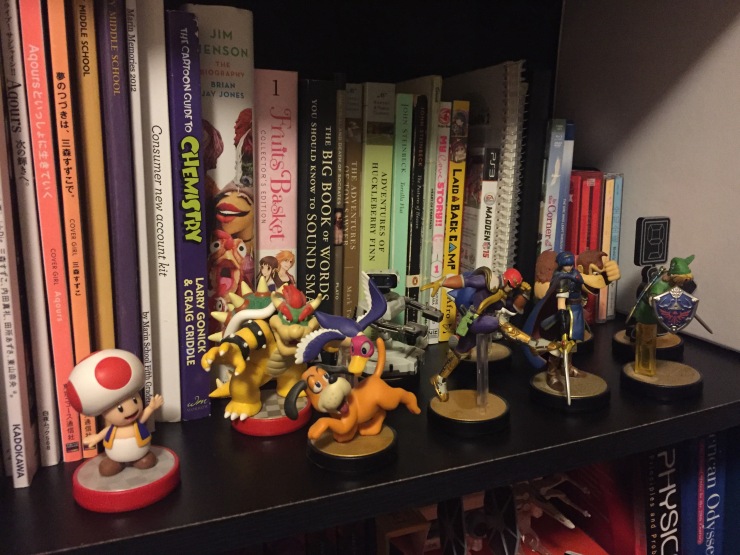 I don’t read manga a lot, I just never really got into it. I also have never bought physical manga in my lifetime before but after this past Friday, that would change.

I was at my local Barnes & Noble (it’s a bookstore chain here in the US) and while I was picking out an SAT study book, I found myself adding three manga to buy as well, one you can see in the picture above. The millisecond I saw the Yuru Camp manga on the shelf, I grabbed that and was determined to buy it immediately but it then sparked a chain of “oooh that manga sounds good” and “this manga looks great” which resulted in Ore Monogatari and Fruits Basket falling into my hands as well.

I haven’t read these yet but when I find some time, I’ll definitely pick these up.

If you walk into my bedroom, you will see that there are way too many things on my walls. My school picture, a graduation diploma for finishing middle school (yes, my school did that), a ukulele and a whiteboard that I don’t use. But out of all those, my posters are probably what’s the most prominent. Other than stuff relating to my local sports teams and my beloved movie posters of Back to the Future and Ghostbusters, it wouldn’t be long until anime related things joined in.

Well, it was pretty obvious that I would buy a Love Live! poster. While I was on Etsy (the online store where I bought these), I was actually debating on if I should get a μ’s or Aqours one but it seems like I wasn’t fully devoted to Aqours at that time yet.

Well, it was also pretty obvious that I would buy a poster of the Amagami SS ladies. I was actually surprised that someone was selling Amagami SS related things. I mean, the series is like eight years old and I don’t think many people even remember this series as of today, but I’m glad it’s still relevant. 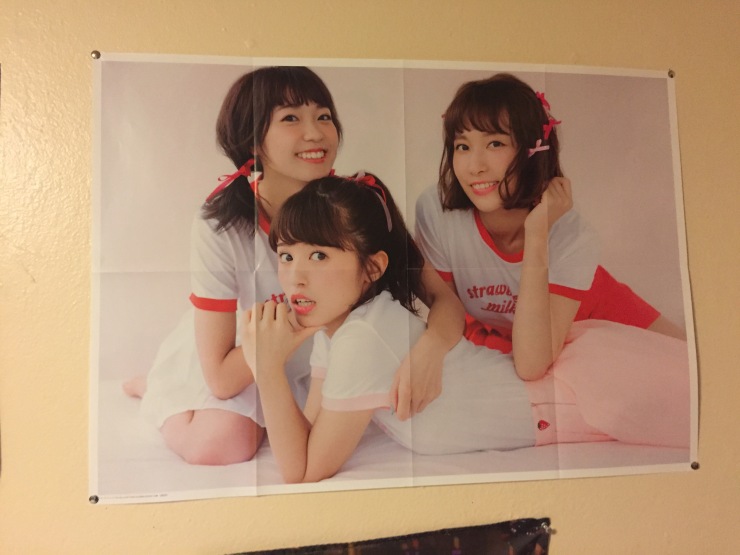 This last one is actually Love Live! related, as these are the seiyuu of the second years in Love Live! Sunshine!!, Saito Shuka (Watanabe You), Aida Rikako (Sakurauchi Riko), and Inami Anju (Takami Chika). I was actually a little hesitant on putting this particular poster on my wall but I convinced myself that it was worth putting up 😛

I’ll talk about where I got this poster in the next section.

So yeah, about these…

I think I started buying these magazines since the Aqours seiyuu (especially Shuka) were starting to get more modeling opportunities and after seeing their photos circulate around the internet like Instagram, I thought it would be worth getting one… or two… or even five.

I know the word “gravure” can have people wondering, but it’s not anything overly sexual. These are just wholesome modeling magazines of seiyuu. Most of them are of the Aqours seiyuu but once I actually went through them, they had other seiyuu I really liked such as Minase Inori, Uesaka Sumire, Uchida Maaya and also Sphere. There was a lot of Suzuko Mimori featured too. 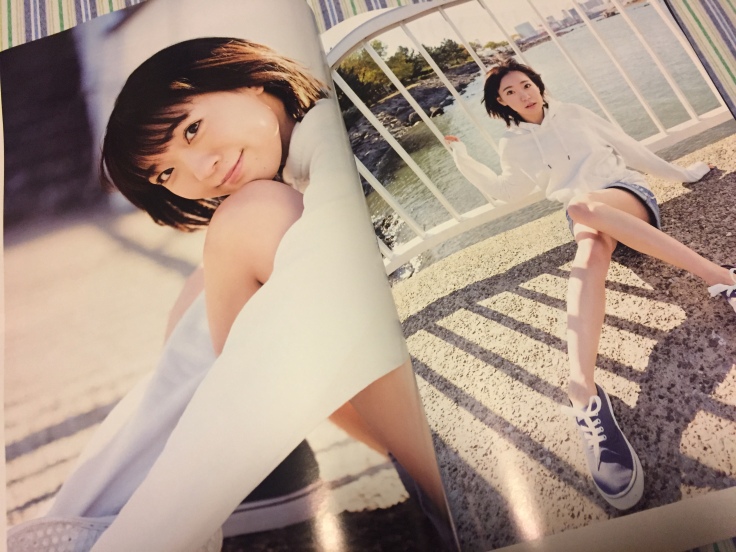 But hey, they also sometimes give you a poster as well! I got the Aqours second year seiyuu poster from their “My Girl vol. 20” issue, I think that’s the main reason why I even bought the magazine lol

In the seventeen years that I’ve been alive, I have never bought a CD, nor a DVD/Blu-Ray. Once I became more of a teenager/young adult, those were starting to become obsolete thanks to media being featured more digitally.

But since Japanese music can sometimes be hard to find on the web (or the fact that your favorite band’s record label took all their songs off of all streaming services *cough* SHISHAMO *cough*), one of the few choices you have left is to actually buy the album. And knowing me, I just simply couldn’t wait for the whole “SHISHAMO 4” album to be posted online.

So yeah, here are the only three CDs that I have and possibly the only three that are in my household. Polkadot Stingray’s “Zenchi Zennou”, one of Aqours’ singles featuring the anime’s ending and “‘MY LIST’ to you!” and of course, “SHISHAMO 4”.

And like figurines, I would buy more music but they are just super expensive for me.

I think this is where I start to refrain from buying; one because t-shirts are expensive as hell and two, I’d rather not be so blatant with my love of anime.

That’s why when I was deciding on what Love Live! shirt to buy, I went with the most subtle one: 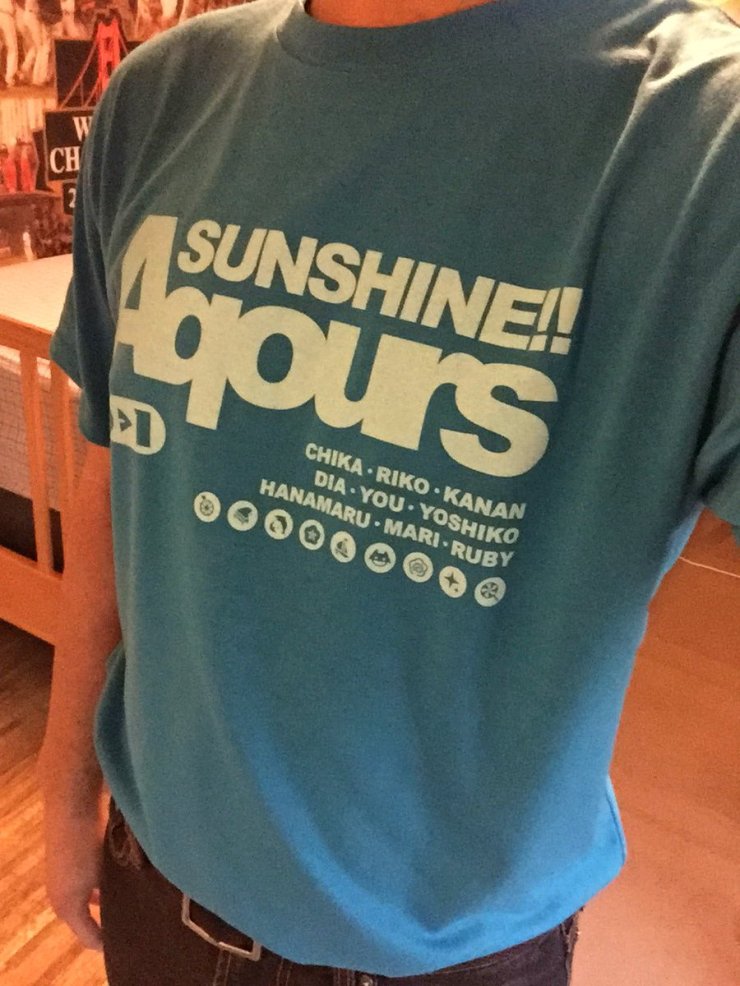 I also got a SHISHAMO t-shirt a few months ago.

And that’s all I wanted to talk about today. I will admit that I kind of spent a little too much on what I showed you guys today but I think it’s worth it 😛

I just wanted to make this post since it’s been two weeks since my last write-up. I’ve been working on the #moe404 blog and also a super special collaboration but I will try my best to post something at least once a week here.

Also, I would love to know what anime/J-culture merchandise you have! Feel free to comment down below.

9 replies on “Merchandise Can Take Over Your Life”