Appreciating (Most of) the Characters of Katawa Shoujo

You know, one of my goals for 2018 and in general is to play more visual novels. I think I’ve recently had this urge because obviously how insanely popular Doki Doki Literature Club got within the internet community in the past year, plus I can see from other people’s opinions such as my peers in the WordPress community that there are some VNs with solid stories to experience.

However it’s already the middle of the year and what do you know, I haven’t even touched a visual novel since the end of last year. I did try to play DDLC because of the hype and even bought a few like the Clannad VN and some from one of HumbleBundle’s specials but I realized that you need to actually pay attention, unlike with anime where I can be half-asleep and still fairly enjoy the show at the same time… alright maybe that’s just me to be honest

But let me say that I have completed a visual novel before, my very first one, and talked about it a good amount on my previous blog. And that VN is called Katawa Shoujo. 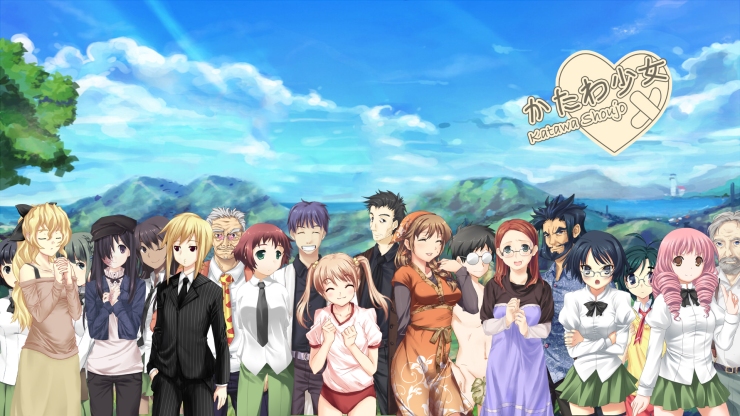 To give you the rundown on what this VN is about, we follow Hisao Nakai, a normal high school guy who suddenly suffers a deadly heart attack after a classmate confesses her love to him. After experiencing and recovering from the life-threatening incident, Hisao is now forced to enroll in an academy for the disabled, a decision that he thought was very unnecessary and felt like he wouldn’t fit in a place like Yamaku High. Essentially, this is the story of Hisao and him both adapting to a brand new environment and developing relationships with five wonderful ladies who all suffer from different disabilities.

I think this VN has garnered a lot of popularity around the web, and I can’t see a reason why it wouldn’t. It’s such a unique premise and the story behind the creation of this visual novel is fascinating on it’s own. The fact that this whole game was created by a group of random people who met on the Internet, more specifically 4chan, it’s almost unbelievable that something like that can happen (given how the 4chan community can be…).

That being said, this idea of a post popped in my head for some random reason. Today I’d love to make a, sort of, appreciation post about the characters in this wonderful visual novel.

Now that I think about it, Hisao isn’t a bad protagonist and there are definitely some good qualities he has throughout this story. Hisao is very, very gentleman-like and honestly is a helpful person when dealing with most of the characters in this VN, one of his best qualities as a person. The way he develops throughout, beginning as a person who didn’t believe he could fit in a place like Yamaku, turning into a person who found that not everything was bad in this new environment, it helped a lot with each of the individual stories he experiences.

I honestly don’t have much else to say about Hisao, other than he should consider finding a better style than that sweater vest. C’mon bro, change it up once in a while. 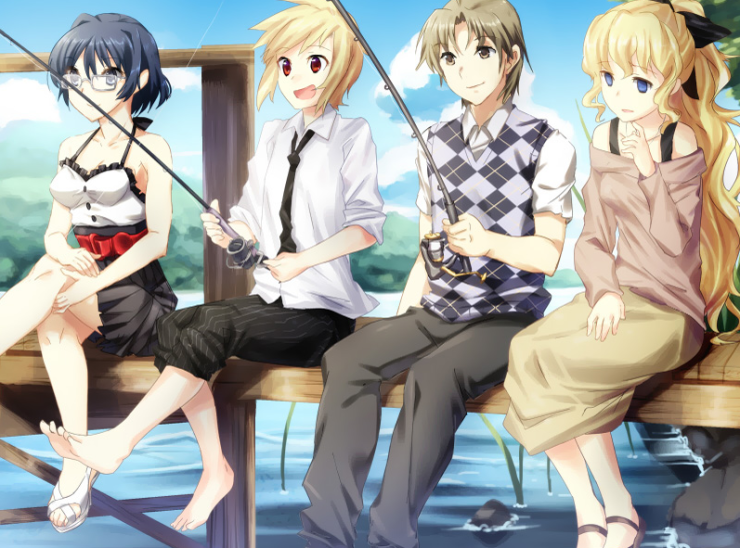 I think I’ll go in order of which story I first played and so on. Rin is an interesting soul, definitely. Her presence and the way she talks to Hisao and others are both very awkward yet entertaining, and the philosophical-sounding things that come up in her mind just make her the Rin many of us KS fans love. I think one of my favorite things about Rin is definitely her carefree attitude, as she can be pretty blunt and honest when talking to Hisao about pretty much anything, as well as not knowing what the word “privacy” means at different occasions. Because of her carefree vibe, I can see why she can be thought as of boring by the way she acts and talks, but I still believe that Rin was a great character to see the story of later on.

And as you can tell from the picture, Rin doesn’t have any arms due to a birth defect she experienced plus the surgeries following. However that doesn’t stop her from doing simple things like eating food or even painting odd-looking yet impressive art. 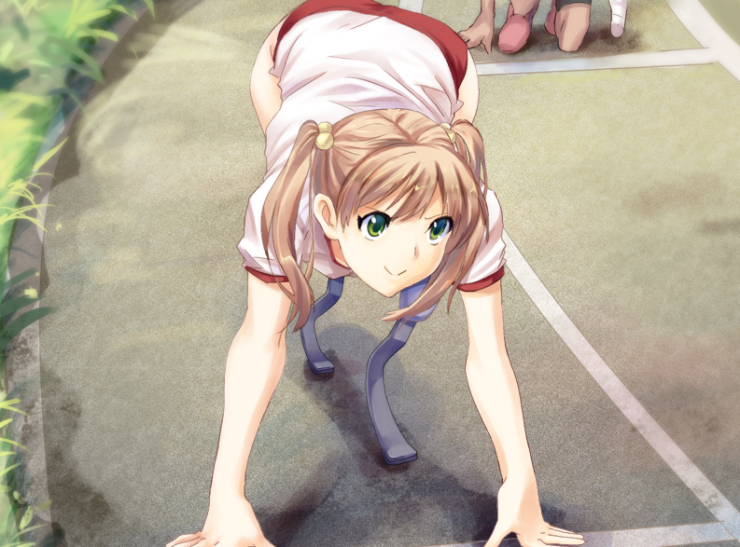 Emi looks like your stereotypically small, hyper, clumsy, happy-go-luck gal… because she is! But even though everyone has seen this kind of personality in stories, maybe even too many times, I would say that Emi is still extremely likable, thanks to the perseverance she has due to the lack of legs she has to walk on. You really have to appreciate the positive way she sees her disability; instead of feeling like she can’t do much, she thinks the opposite, making it her goal to be an avid runner with her prosthetic legs and be the best in Yamaku’s track team.

Plus I just have to say that even though the romance between Hisao and Emi was very cliche and pretty cheesy, it still put a smile on my face to see them being lovey-dovey and… experiencing… new things. Ahem. 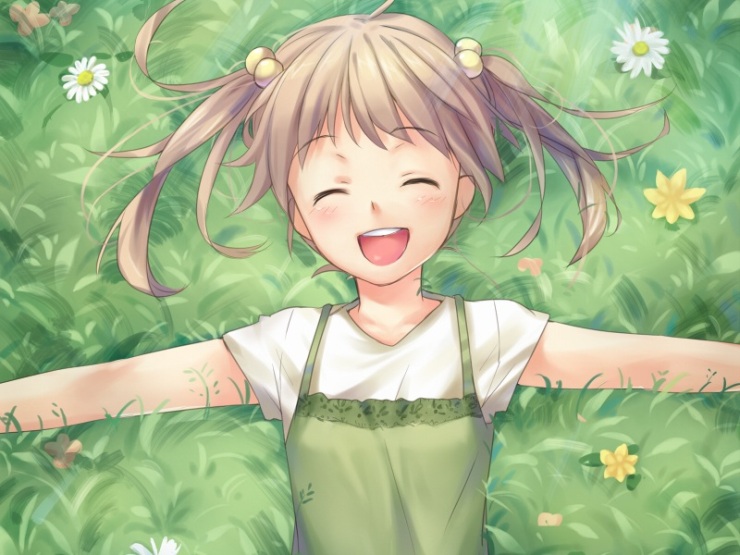 Let me admit that out of the five arcs/stories of Katawa Shoujo, Shizune’s was my least favorite. However, that doesn’t mean I don’t like her as a character!

Shizune’s deaf but that doesn’t stop her from being a hard-working and strict student council president. Her work ethic is something to look up to, I mean if it means taking time to walk all around the school to scold people for not doing something right, then you can see that her determination and dedication for this job is through the roof. And the fact that she can be pretty strict and also intimidating even though she can’t speak (and the bubbly and happy personality of Misha is her translator), it’s impressive to watch Shizune as a person and character.

Misha doesn’t have her own separate route in this visual novel (and that’s a damn shame) nor does she have a disability (at least it was never revealed) but seeing her have a great presence and impact in Shizune’s route as her translator, to be honest it made me prefer her even more than the main heroine. Throughout Shizune’s route and her occasional appearances in other ladies’ stories, I really did love seeing her, being so adorable, lovable and especially entertaining to watch. I’m sure she would be pretty annoying to deal with in real life but her loud volume while speaking and the amount of times she has to bother you, most likely because Shizune wants to discuss something with you, but it was fun to watch Hisao have to deal with her antics.

Speaking of Shizune, I loved the close friendship of her and Misha. While their chemistry may not be perfect, I could see they definitely enjoyed each others’ company.

Also didn’t you love hearing “Wahaha~!” countless amounts of times from her? If Lilly’s story was the only one where I cried as much as a 4-year-old child would (specifically towards the end), then I think you know who my favorite character is out of the bunch.

I seriously love Lilly so much as a character and person. Polite, formal, motherly-like, BEAUTIFUL (emphasis absolutely needed) and most importantly, super sweet. Really, what’s there to not like about her?! It’s also good to note that even though she’s completely blind, her sense of independence, urge to help others and her being a great role model for others despite her obstacles is just awe-inspiring. A good friend who can comfort even the most tense and nervous person in the world like Hanako… pretty sure she’s actually a goddess. 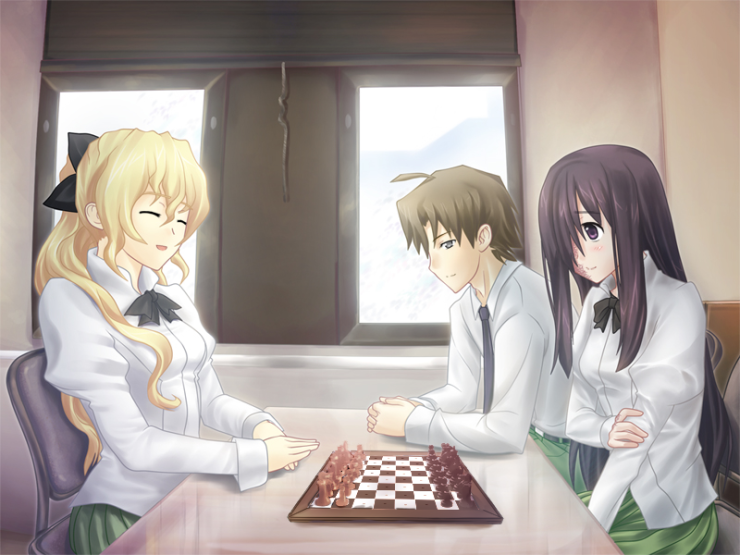 And the relationship she has with Hisao… I’m smiling just by remembering reading through her story. Probably one of the best couples I’ve seen in the universe… but that’s just my biased opinion lol

Also did I mention that she’s incredibly gorgeous?

Before I played this visual novel, I heard from many people that Hanako’s route was arguably the best one out of the five… and while I love Lilly (as a character) the best, I will have to agree with those opinions.

Hanako was such an interesting character to see in this story, as she is pretty unique from everyone else. I think her extreme timid nature and the way she acts, being so isolated from others after she had a traumatic incident involving her getting burn scars on the right side of her body, you start to appreciate her even more throughout her story, as you watch her develop into possibly a much different individual now that she has friends like Lilly and Hisao.

And I’ve also heard from others that Hanako can be very relatable to many peoples’ personal lives such as the social anxiety (including myself) they experience on a daily basis as well. It’s nice to know that people can find a reflection of themselves in a game like this one.

Alright, let’s talk about a couple of the side characters now… Kenji is the one who looks like Harry Potter in the image above and oh boy, he is something else.

Kenji is Hisao’s roommate directly across the hall from him, and most of the time he stays in his room, creating a plan to go against the feminists who he believes are “evil and will rule the world”… not even joking with that description. But beyond his paranoid and very misogynistic behavior alongside his obsession with feminist conspiracy theories, Kenji is simply a weird dude. Asking Hisao for favors without any rational reasons, barely leaving his room, not knowing normal social protocols such as not putting on a towel on in the dorm bathroom, that is pretty much Kenji in a nutshell. However there are some times where he can genuinely be (or at least act like) a good person and I definitely warmed up to enjoying him as a character throughout the visual novel. Aaaand that’s what Yuuko pretty much does, give advice. Yamaku’s librarian usually has many encounters with Hisao around the school and even public places such as the Shanghai Cafe where Yuuko works as well. She’s actually a character that I neglected a lot throughout this VN, but now that I’m writing a post like this one, I’ve realized that Yuuko was actually pretty darn cool. While being shy and clumsy, she can give some excellent advice that Hisao uses whether it be about books or anything involving relationships. Also overall, she’s a sweet lady despite her nervousness and such.

Alright, I think I’m gonna stop right there because we would be here for much longer if I went through every single character, but I hope you enjoyed reading this! Also if reading through this whole post didn’t encourage you to play this visual novel already, I would absolutely say that it’s worth your time whether or not you play visual novels frequently.

And if you did play this VN, I would love to hear your thoughts on the characters or anything else about it! Feel free to leave your thoughts in the comments.

(here’s a link to the official website if you’re interesting in playing it, it’s free!)

5 replies on “Appreciating (Most of) the Characters of Katawa Shoujo”