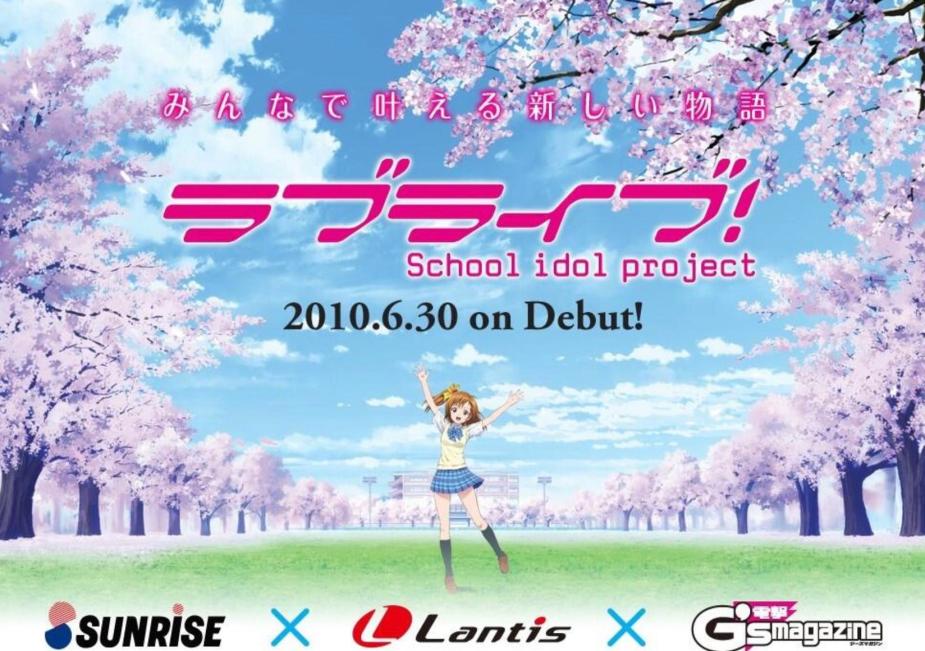 I think we all know what would happened in the next eight years for this project; giving us 27 idols to learn about and love; 27 voice actresses who put their time, sweat and tears into depicting these wonderful characters; hundreds of fun songs to listen to; 2 anime series, 2 movies and the possibility of more with the upcoming PDP group; a handful of live concerts held around the world; a mobile game with millions of people playing it; billions of dollars worth of merchandise sold; and most of all, the massive and dedicated fanbase it has created not only in Japan, but the rest of the world as well.

I definitely wasn’t around when LL first started (if I recall I think I first watched the original series back in February of 2017), but I can’t deny that this franchise still has had a pretty big impact in my life in such a short period, given that I have and still do devote a lot of my time into this fandom. But all that time doing so, I feel like, was very enjoyable. 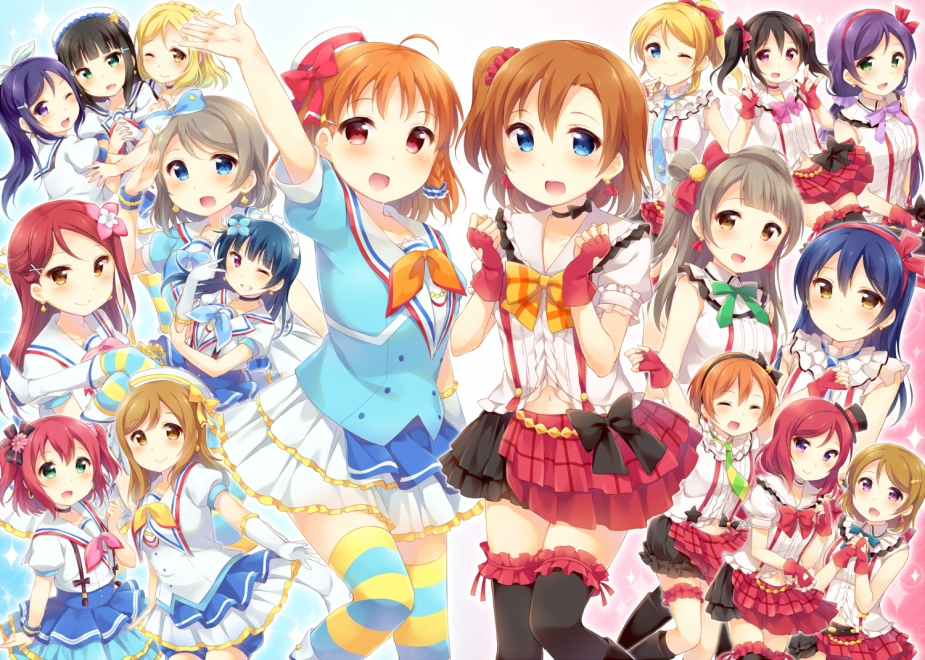 So because of the special occasion, I have decided to use this whole month of July to do something I should’ve done earlier in the year, but never got the opportunity to.

I’m pretty sure everyone who follows my blog knows who Remy from The Lily Garden is; an aficionado in all things yuri and really just someone you can look up to as an aniblogger. Well back in December 2017, he did something fun regarding the Love Live! series where he wrote nine posts, giving five reasons why each of the ladies in the school idol group, Aqours, could be considered best girl. It was an entertaining series of posts to follow along to, and it even made me want to take on the challenge of doing the same with the original school idol group, μ’s. 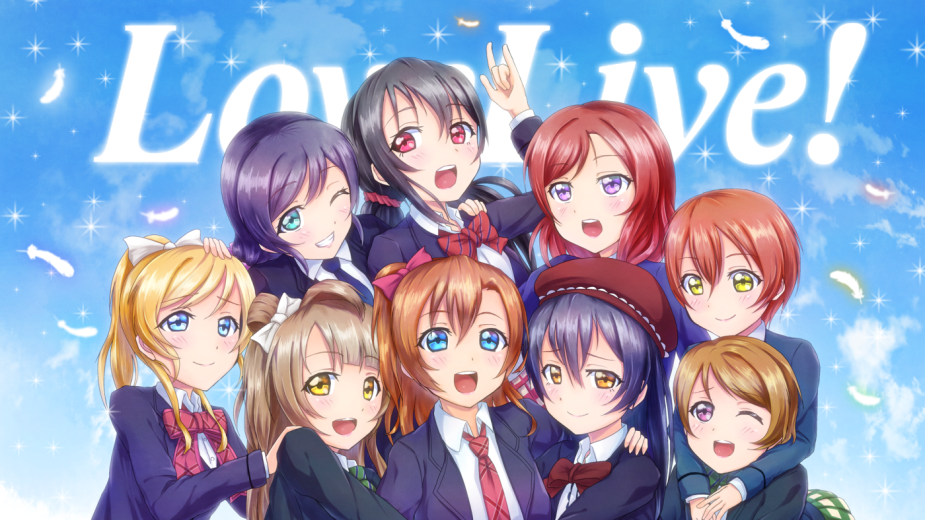 I asked him if I could do it back in January, and I apologize it took 6-7 months but I’m glad I could do it at a special time like right now!

I don’t want to make this introduction anymore longer but essentially, I’ll do my best to give five reasons why each wonderful lady in μ’s could be considered best girl. It’s also good to note that I’ll try to refrain from using the same reasoning for multiple girls like “she has such beautiful looks”. That’s obviously a given for a lot of these ladies.

Lastly, this particular installment of this series of posts has been written before on my old blog so if you have seen this one before, just bare with me here and the next one will be out in a few days.

Let’s get started on my five reasons why Ayase Eli is best girl!

Usually when we see Eli-chan in the anime, she is fearless and has the confidence to succeed in whatever challenge is in her way…

…except maybe being in the dark.

And not only that, she can have a few mess-ups here and there. One example from her best friend Nozomi is that Eli one time almost ate a plastic chocolate, thinking it was real. It just makes you smile at the fact that someone like this can have a cute side to her.

One of the many things that makes Eli more unique from the others is that she has a different ethnic background. If you didn’t know, she’s part-Russian, derived from her grandmother. While she doesn’t reference her culture a whole bunch in the anime, the one memorable Russian-related thing is definitely her catchphrase, хорошо (pronounced “Harasho”), which means “good” or “okay” in the Russian language.

3. She has an excellent sense of leadership.

Whether it’s her background as Otonokizaka’s student council president or the fact that she can be considered one of the leaders of the group (one reasoning because she was chosen as a leader of one of the three subunits which hers would later be known as “BiBi”), it’s a given that she can lead her peers to success. 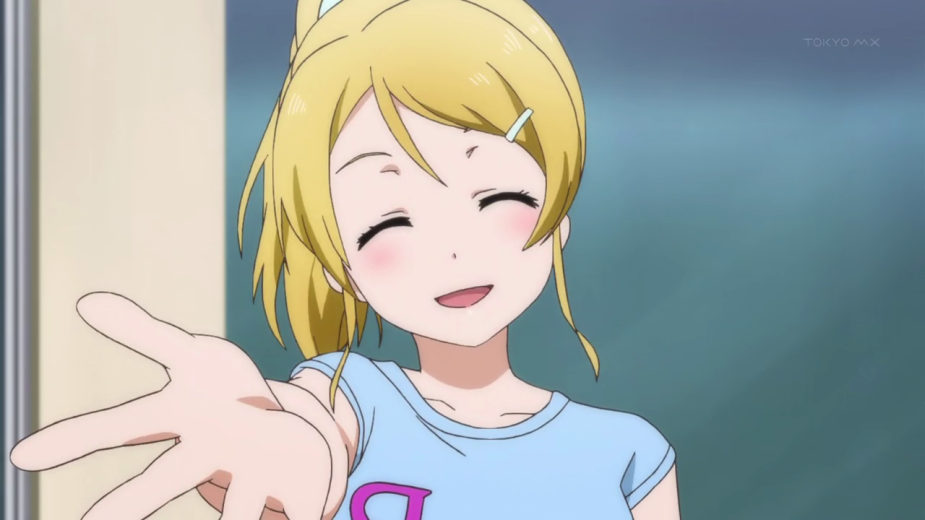 2. She is an amazing choreographer. I guess this could be considered minor spoilers so I’ll give you a warning real quick: as a child, Eli was a ballet dancer, just like her mother and grandmother. However due to some issues and frustrations ensuing, Eli ultimately gave up following the family tradition any further.

But it’s no question that Eli is a great choreographer for the group and has developed many interesting dance routines for most (I’m not sure if she did all of the choreography for every song) of the μ’s discography. For me, I think “Kaguya no Shiro de Odoritai” probably is my favorite choreography out of all the μ’s songs.

1. She’s an amazing role model for others.

As I mentioned in one of the choices above, Eli is not perfect. But let’s just agree that she’s damn near perfect.

When talking about how Ayase Eli is a role model to others, there are so many things to mention. Her work ethic, the skills she has garnered, her ability to lead people to success, how dependable she is, her kindness to others, her beautiful looks, the list is endless. It’s really no surprise that both everyone in μ’s and the students at Otonokizaka look up to her. I think that’s a good list. I’d also like to mention that her seiyuu, Nanjou Yoshino, has a really beautiful voice:

But other than that, even though Eli is not one of my best μ’s girls out of the nine, I can definitely see why people like her.

And we’re finished with the first of nine! A reminder that this “segment/thing” will go on throughout the month of July so if you’re enjoying it so far, I’d be glad for you to come along for the rest of the journey.

Lastly, which μ’s girl would you like to see next? Feel free to leave your suggestions, as well as feedback/comments, in the comments section!