Most, if not all, of us in the anime community know the talented voice actress that is Hanazawa Kana. Her entertaining performances as Sengoku Nadeko from the Monogatari series, Shiina Mayuri in Steins;Gate, Sonohara Anri in Durarara!!, Kamishiro Rize from Tokyo Ghoul, and many other roles makes her a really enjoyable and memorable seiyuu to see in various anime. But more recently before she took on particular roles as Kobuchizawa Shirase from A Place Further than the Universe and even AE3803, the red blood cell in one of the most popular shows this Summer 2018 anime season, Cells at Work, she actually starred in a live action short film!

I was browsing YouTube one day and while I stumbled upon a really nice channel (Potastic Fansubs) that subs fun seiyuu videos featuring different stars like Hayami Saori, Touyama Nao, and Minase Inori (as well as me learning that a bunch of Ogura Yui’s colleagues are obsessed with her cuteness), I found that they fully subbed Hanazawa Kana’s live action movie debut in English!

(the video above is actually the full movie!)

I was very much curious on what this film was all about and how HanaKana is as a live-action actress compared to her voice acting, and yesterday was the day I found time to watch it. So, I’d love to share my thoughts on it!

I may or may not make this post a proper review on this movie, but more what I thought of the movie as a whole. Either way, let’s just jump right in!

(Also, I don’t think I mention any major spoilers but still be cautious) 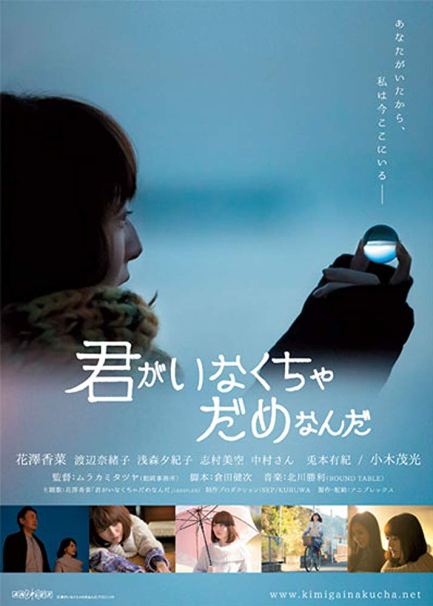 Hanazawa takes on the role of Kaede An, a children’s picture book author and daughter of famous novelist Shizuma Kouhei, who disappeared from An’s life when she was a young girl. After winning an award for her work as a rookie author, An finds herself in a slump, and ends up messing around and wasting time with a way overdue deadline on her back. One day while An goes out to find her missing cat Pero, she mysteriously discovers a message board with writing in the style of her missing father. After finding more and more of these strange message boards around town, An puts all the pieces of the puzzle together, with it revealing an incomplete story. However, An starts to realize that this story is much deeper than it just being a narrative.

Well the first thing I want to say is that this movie was enjoyable to watch. A few positive things I noticed was the general progression of the story throughout, with a twist that definitely made the movie a lot more enthralling to watch; and the sweet father-daughter relationship between An and her dad, and how that correlated with the story shown on those message boards. Those particular “things”, for a lack of a better term, were expressed pretty well and made for an interesting, and even somewhat emotional film to experience.

But at the same time, I felt like some pretty important things were missing that could’ve explained some parts of the film a lot better. And I know I tend to miss things when watching stuff (and life in general lol) but there were certain times while watching this film where I was legitimately confused and said in my head, “wait, in what way is this one part related to the other?” and “why and how did so-and-so appear in this scene?”. Hell, I’m even confused about which is HanaKana’s character’s first name: “An” or “Kaede”. But while you can watch this movie a second or third time around to definitely catch some things some people (like me) can miss, it still feels like they could’ve made particular parts in the film a lot more clear.

This is my first time reviewing a live-action film and my “analysis” might be a little bit brief, but I thought the acting by this particular cast of people was pretty nice. I don’t really have many complaints about how these actors and actresses, other than at some moments, the performance by certain characters didn’t feel natural. But I guess now I can talk about the main reason why I watched this film: Hanazawa Kana’s performance.

I think my overall thoughts on HanaKana’s acting in this is that, it feels like this wouldn’t be the type of film/role she would do (keeping her anime performances in mind), and this can be interpreted as both a good and bad thing. For one, something to consider as an actor or actress is to go beyond your boundaries and try out roles that are completely different from what you usually do. If HanaKana was doing that, I have no problem with it. But considering how she is as both a voice actress and a person outside of acting, being the main character in a tragedy drama, in my opinion, was too out of place. I’m not saying she did a bad job, her acting in this film was actually pretty good (other than the very rare occasions when it wasn’t remotely believable), I think it’s just that I’m so used to her being in a very happy/genki behavior and having an uplifting voice most of the time. Seeing that kind of happy personality in the beginning of the movie, then it pretty much disappearing for the rest of the movie, it’s… weird to see that, coming from a fan of hers. But then again, I haven’t seen HanaKana’s performances in the dark-looking, drama anime she’s featured in so I don’t know if I can say much.

Lastly, discussing the artistic side of this movie, not bad. It has a very calming and mellow mood throughout, with the type of cinematographic shots being a major part in it. The background music also provided the mellow vibe of the movie, and actually reminded me of something you’d hear in a children’s/Ghibli movie (possibly a nice touch since An is a children’s book author).

KanaHana also performed the theme song of this movie, which has the same name as the movie (you don’t hear it for some reason in the video subbed by Potastic Fansubs). And I mean, what can I say, Hanazawa-san has a VERY beautiful voice and it’s a very beautiful song to listen to.

Kimi ga Inakucha Dame Nanda was the first time I’ve ever watched a Japanese live-action movie, and for the first one, it wasn’t bad. It was interesting to test the waters of watching Japanese live-action movies, this particular one having a mostly intriguing storyline, nice visual and musical elements, and a voice actress that I’m very fond of being the main role. While it was pretty unusual to me, Hanazawa Kana portrayed her character in a great way and I’m just happy she got the opportunity to act in something other than an animation. It does have it’s very apparent flaws, but I still would suggest watching it to watch an enjoyable movie, as well as seeing how a talented voice actress like Hanazawa Kana is in something different like a live-action movie.

(and in case you missed it at the top of this post, you can actually watch the full movie, English-subbed, on YouTube by clicking here, thanks to the Potastic Fansubs YT channel!)

And that’s pretty much all for today! After watching this movie, I definitely want to check out some other live-action movies. I have some in mind such as the Kimi ni Todoke live-action adaptation, just to see how it compares to the anime one. But if you have any suggestions for me, I’d love to hear them in the comments!