Obviously as we’ve seen in this world, many people don’t like change. People fear change because, for example, it can significantly change how they do things while they could continue to do it the way they’re fully familiar with. I don’t want to get into the details of it but it’s definitely a big part of how we think as people in our various societies.

So, imagine the date is February 15th, 2015. Dengeki G’s Magazine announces the new generation of Love Live school idols, a group named “Aqours”. In the following days and months, you get to see the new characters, images, voice actress cast, and much more content regarding the new group. You can see some fans on the internet get real excited, finding the character personalities/descriptions interesting, already claiming their waifu, and ultimately wondering what these nine brand new girls will bring to the table in this extremely loved series.

While on the other side of the fanbase… it’s a lot different.

All the μ’s superfans and otaku attacking and criticizing this new school idol group, while also inspiring others to jump on the hate train. “I’m not about to follow another idol group, no way”, “These characters look generic and boring”, “I’ll always love μ’s no matter what!”, “Aqours is a complete rip-off of the original group”, “There’s absolutely no possible way I can cheat on my beloved waifu, (insert μ’s member here)!”.

As terrible of a fan response as that sounds, it’s a given that something like this can happen. Not that many people had faith in Aqours, some didn’t try to give them a chance at first, and even today I bet there are some hardcore μ’s fans who barely or even flat out don’t follow Aqours at all. It was so bad in the beginning that even Inami Anju, the seiyuu who voiced Takami Chika (the leader of Aqours), mentioned during a small speech at a major LL event how tough it felt being underappreciated by a good chunk of the Love Live fanbase. 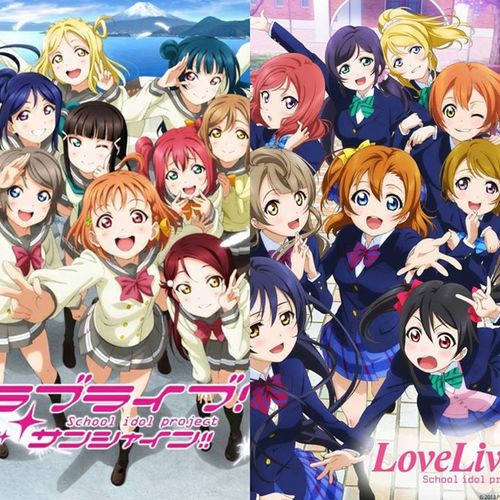 But the thing is… Aqours became a huge success in the end. As you can see, even in the eyes of non-LL fans, so many people love everything about this second generation of school idols. The characters, the music, the seiyuu, the list goes on and on. And if you need to hear a first-hand experience, I myself love a lot of things about Aqours (especially the seiyuu side of it), to the point where it’s difficult to say which group, Aqours or μ’s, is my favorite/better.

So now, fast forward to today. Aqours is essentially exceeding their potential and are as popular as ever. But around early 2017, it was announced that a brand new wave of school idols would enter the LL scene, them being a part of something called the “Perfect Dream Project”. 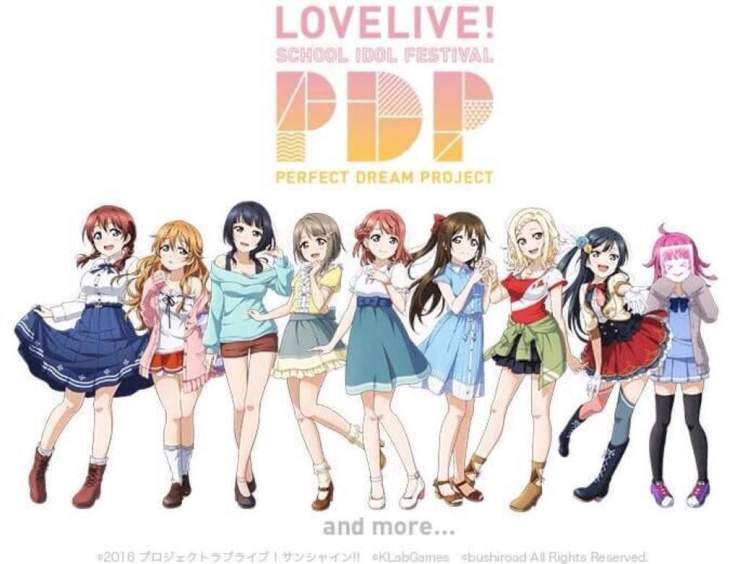 Essentially, this group was created to promote the new mobile game coming out in 2019, Love Live! School idol festival ALL STARS, produced by KLab Games, who made the previous and popular Love Live rhythm game Love Live! School idol festival or “SIF” for short. However when we stray away from the mobile rhythm game for a second, they actually are a really interesting and unique school idol group compared to μ’s and Aqours. To give you a real quick background on how they were chosen; a poll to see which “Normal” card/tier idols in SIF were the most popular and the top three were chosen to be a part of PDP, them being Verde Emma, Osaka Shizuku, and Konoe Kanata. The rest of the idols are completely new creations.

So the entire point of this post is basically to give my two cents on why avid Love Live fans who adore μ’s and/or Aqours, shouldn’t start thinking the Perfect Dream Project is not worth their time. But this post can also educate you a little about the new group, if you’ve never heard of them at all. And I’ll break it down in a few points, so let’s begin!

First off, the characters are significantly different from the previous generations. One of the things I didn’t like about Aqours at first was how easy it was to compare almost, if not, all of them to the previous school idol group, μ’s. You know, like how both visually and characteristic-wise Chika is very similar to Honoka, You to Kotori, Ruby to Hanayo, etc. I mean, I’m fine with referencing and tapping into the older stuff but from my perspective, it feels like they weren’t even trying anymore with some of the character concepts.

However, I think they learned their lesson when creating the PDP group because these particular characters have backgrounds, personalities, and/or even character designs we haven’t really seen in the Love Live series yet. Just to give you a few examples; Yuki Setsuna, an aspiring idol who also has otaku traits/hobbies such as watching anime and playing video games; Osaka Shizuku, a transfer student and lover of acting and dramas, decided to become a school idol because she finds it similar to acting; and Verde Emma, a nature lover from Switzerland who’s also a big sister of 8 siblings. It’s also good to note that with this particular group, it seems like they focused on showing these characters pursue individual dreams more rather than a single group goal (but that could change for story purposes).

If you look at all of other the PDP character backgrounds, you have to admit that they are very much unique from the previous generations, and possibly even agree with me that they put more time and effort with PDP than, say, Aqours. I’m not saying Aqours is bad for not necessarily being unique, of course not, there are a whole ton of other factors that make them good. What I am saying is that the fact that unlike with Aqours, PDP is a lot more diverse with their idols which makes for even more new experiences, story and character progression-wise, for purposes like if they green-light an anime series for this group.

And sure, you can still compare some of these characters to previous generations such as how Tennoji Rina is socially awkward like Ruby. But as I said, it seems like they took the time and effort to make them different because unlike Ruby, Rina is so shy she won’t even show her face and instead uses a drawing board to express her emotions.

…don’t you find that type of trait/behavior at least, a little interesting?

Secondly, the choice of voice actresses was superb and they’re already enjoyable. As you may know, I’m a huge fan of the seiyuu culture and enjoy the talent and work of many voice actors and actresses in the Japanese entertainment industry. And one of the big reasons why I did get into this side of anime and J-entertainment, was because of the Love Live series. The voice actress side of Love Live, or what one would call “2.5-D idols”, has actually become a major part in liking this franchise. Watching endless videos of the μ’s voice actresses do fun activities online, then the ones for Aqours doing the same, it got to a point where I thought the seiyuu side of this franchise was ultimately better and more enjoyable than everything else. I think when I say I love Saito Shuka more than the character she voiced and who I consider my Aqours “waifu”, Watanabe You, it says a lot.

The seiyuu of PDP have already been presented to us and have been shown in a lot of public events and livestreams. And from what we’ve seen, they are pretty damn entertaining and already loved by fans including myself. I’ve already started picking favorites such as Kubota Miyu who voices Asaka Karin… she’s just STUNNING.

But looks aside, a lot of the seiyuu involved with PDP already have some nice backgrounds. For example, Kusunoki Tomori who voices Yuki Setsuna recently had a main role of Kohiruimaki Karen from Sword Art Online Alternative: Gun Gale Online; Kubota Miyu has a role right now as Medusa from Jashin-chan Dropkick (who by the way stars in it with Aqours seiyuu, Suzuki Aina) and is actually a member of a well-known J-idol group called i☆Ris; as well as Kito Akari who is notable for her recent roles of Hinata Kaho from Blend S and Seiun Sky from Uma Musume: Pretty Derby. As you can see, we have some seiyuu who, while still fairly new to the industry, already have nice resumes on hand.

And most importantly, they’re fun to watch. And it seems like they’re incorporating different fun activities for the seiyuu to do, such as video games or card games.

While PDP barely has any actual songs for us to listen to, so far, it’s promising. This section is a little harder to talk about since, well, only the previews of three PDP solo songs have been released. But I can’t say they aren’t already nice to listen to, with one of my favorites being Shizuku’s:

However given the past projects and roles the PDP seiyuu have been in, I feel like we’ll be in good hands when it comes to the music and songs of this group. As you can see in this helpful video, the seiyuu already have some idol musical experience, and they sure do have some beautiful voices.

The future songs from PDP; they’re very, very promising, in my opinion.

And most importantly, it’s a Love Live group. Seriously, if you loved μ’s and/or Aqours, PDP is going to have a very, very similar, if not, the same exact vibe and charm to them. They’re school idols, they want to be the best in the business, they have a cute appeal; I mean… come on, they aren’t THAT different to the point where you need to hate on them.

However, naturally, the Perfect Dream Project will get a significant amount of hate. It will be neglected. It will be compared to μ’s and Aqours in a negative way. It’s a given, there’s no way around this. However, as we saw with Aqours, they have a chance to be accepted by the fanbase.

In my opinion, PDP absolutely has potential and I honestly want them to succeed. Just by looking at all of the aspects I’ve talked about, I love the group already. They’re unique, the characters are interesting to learn about, I love the seiyuu; overall, I think they’re promising, coming from a pretty avid Love Live fan. And I’d love to see more songs, more story, and while the chances are pretty slim right now, I’d even want to see them make an anime series about these nine ladies.

So yeah. If you’re unsure on whether or not Perfect Dream Project is worth learning more about and liking, hopefully this write-up helped you make a decision! Also if you’re wondering my favorite girls so far are probably Setsuna, Shizuku and Kasumi. But… that will probably change in the end lol

Here’s a fun video w/, who I think is, the best character trio:

Thanks for reading and if you’re interesting in learning even more about the Perfect Dream Project, the best place to find info is on the Love Live Wikia and this tweet thread by @guurinpas!

**EDIT 10/11/2018 – PDP has released a ton more musical content (or I guess, more previews) ever since this post’s publication, including their very first group song, “TOKIMEKI Runners”. Their debut album which will include that song, as well as all the solo songs, will be released on 11/21/2018!