AOA: The Only K-Pop Group I Really Know About

Despite me getting into the Japanese pop craze with idols and such, I never thought I would start listening to the way more popular and loved pop music of their next door neighbors, South Korea. Recently I’ve been seeing more and more foreigners, such as people here in the United States, become fans of various K-pop groups such as BTS and… that’s the only one I know lol

I took a quick listen at one of BTS’s songs, “IDOL” (which already has over 150 million views on YouTube after only 2 weeks since the MV released), and to be honest, they’re better than I expected. I can definitely see why a group like these guys are loved by many, it really isn’t anything new since there have been countless male pop artists and boy bands who have gained a huge following and fanbase. I think what does surprise me is that it seems like an Asian cultural phenomenon like K-pop is being more and more accepted in foreign societies nowadays, not only with the fan side of things but also other celebrities, musicians, and artists acknowledging their massive potential and talent such as the popular hip hop artist Nicki Minaj collaborating with the group on a song or viral TV show host James Corden inviting them on his late night program.

But I didn’t exactly get into K-pop because of recent widely acclaimed groups like BTS, I instead learned about it from a YouTuber I grew up watching who made reaction videos and dumb skits revolving around a couple of groups. I really loved the sound of one of those groups and started to dive into their discography.

That being said, let me talk about said group with my limited knowledge of them, in this short post!

AOA (an acronym of Ace Of Angels), a Seoul-based girl band/group, originally formed by FNC Entertainment in 2012 with eight members consisting of Choa, Jimin, Yuna, Youkyung, Chanmi, Hyejeong, Seolhyun, and Mina. As of this post’s release, they act as a six member group, as both Choa and Youkyung left for personal reasons. 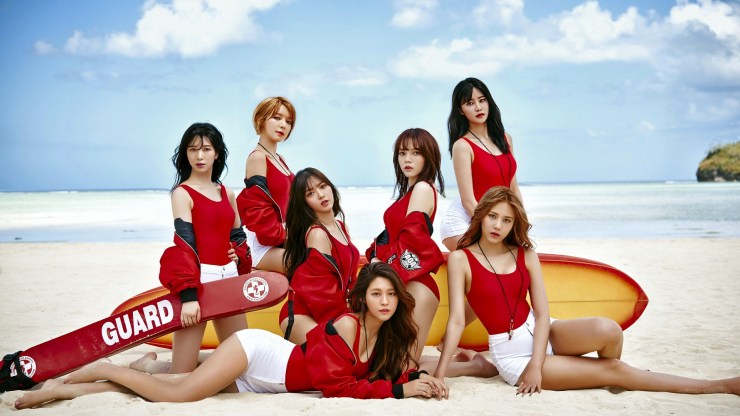 A good way to describe this particular pop group is from the about section from their Spotify artist page: they “perform R&B-influenced pop”. And they definitely do, as a lot of their songs I’ve listened to have that mix of pop, hip hop, electronic, and funk that you tend to see in the R&B genre of music. Plus, adding their great vocal abilities (more specifically Jimin’s unique and pretty impressive hip-hop style rapping talent) to this particular style of music, it makes for some pretty fire tracks to listen to.

As you can see with this song and even the MV, AOA has more of a seductive and sexy (this is a rare time you’ll ever hear me use that word, lol) image to them; it being very very different from the usual cutesy J-pop/female-based artists you hear me talk about like Love Live or someone like Ogura Yui. And while I do love the adorable pop music of Japanese idols and pop artists, I think getting into a K-pop group like AOA definitely gives me a pretty different side of female pop groups to enjoy, which I really do with this particular group… and if you’re at all surprised that I got into a risque-looking group like this, I’m on the same page as you 😛

Obviously the alluring image AOA has mostly comes from their looks and how they dress, but it’s good to note that their voices are also a big factor in their particular likeness.. I really love the vocal performances of these ladies, the most notable one being Choa (the member with blonde hair) who, my goodness, has a SUPERB voice. Her intro in the song “Confused” is a great example of her singing abilities.

Something new I noticed about K-pop was the inclusion of rapping in these songs. I don’t think you usually see that in pop music but from the groups I’ve taken a listen to, they definitely mix it in VERY well and blends in with the rest of the vocals nicely. And as I mentioned earlier, both Jimin, the main rapper of the group, as well as Chanmi who’s the lead/secondary rapper, can have some great flow in a lot of their songs.

Overall, AOA does a really good job performing in a very mature and sensual way, and I think that’s pretty much one of the big reasons why I thought this group was interesting to hear at first.

AOA also broke into subgroups, them being AOA Black, AOA White, and AOA Cream. The only one I’ve really taken a good listen to was AOA Black, consisting of Jimin, Choa, Yuna, Youkyung, and Mina. The only original song they’ve released, “MOYA”, is a nice change of pace from the usual music from the main group and is more light and cutesy (it’s also a given that they released this in their very early years, and they’ve definitely changed their image a lot since then). And again to note, this is an incredible example of Jimin’s rapping skills.

I should also mention that the members of AOA actually have some pretty good Japanese speaking skills and have done Japanese versions of a good amount of their more popular songs so… this counts as a J-music post, right? 😛

Lastly, regarding the title of this post, I say that this is probably the only K-pop group I’ll actually know a lot about/get into, simply because I’m too busy with discovering more Japanese music and haven’t really dove deeper into Korean pop ever since discovering AOA. I’m absolutely not saying K-pop isn’t worth listening to (in fact, I believe it is because of the increasing popularity of it in places outside South Korea nowadays), it’s just not on my priority list of music right now.

So yeah. I’ll leave you off with two of my favorite AOA songs, “Short Hair” and “JOA YO!”.

Thanks for reading this different kind of post (lol). If you’ve listened to AOA before, I’d love to hear your own thoughts about them, and if you have any K-pop recommendations, leave it in the comments as well! 😀

13 replies on “AOA: The Only K-Pop Group I Really Know About”