School has started for me a few weeks ago, so you might not see much from me as of now. However since I’ve been dying to talk about Japanese music more on the blog, I’ve decided to do a weekly (?) segment, compiling a list of songs that I’ve discovered either from Spotify’s incredible recommendations, YouTube, other people, anime music, etc. Basically I was inspired to do this segment from both finding a ton of good songs on Spotify recently and me seeing other content creators like music critic YouTuber, Anthony Fantano, do it on their own creative space.

Plus, I think this will help me stay pretty active on this blog. I don’t want to seem like I disappeared from writing lol

I’ve talked about UNCHAIN before on my last J-music suggestion post and since then, I’ve listened to a lot more of their stuff. It was hard to pick one of their songs to feature on this list, but this particular track stood out to me the most. “Robinson” is definitely a great example of what UNCHAIN is like as a rock band and the kind of style they bring to their music, rock with soul/funk incorporated into it, but also it feels a bit more mellow and feel-good than some of their other songs I’ve listened to. Tanigawa Masanori’s always soothing and incredible voice mixed with the distorted guitar in the chorus and nice drumming by Yoshida Shogo, I highly suggesting giving this track a listen to.

AND THE GODS FINALLY LISTENED TO MY PRAYERS

As you may know, SHISHAMO is my all-time favorite Japanese artist/band (hell, I paid way too much to import one of their T-shirts lol). I’ve also been very fond of the popular musical group Goose house who are well-known for their great covers of popular Japanese music, as well as writing and performing the opening theme to the hit anime Your Lie in April, “Hikaru Nara”. What do those two groups have in common? Well, I’ve been waiting for the day that Goose house covers a SHISHAMO song because… why not? 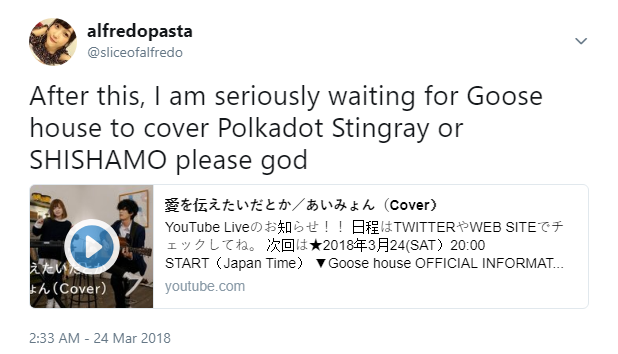 And it seems like the day has finally come, as Goose house released a cover of SHISHAMO’s most popular song, “Ashitamo”, a few days ago. I was screaming inside when I saw it on my YouTube homepage.

Goose house did a really nice job with this cover, I’d say. Kei, Manami, and Sayaka KILLED IT when replicating the vocal performance of Miyazaki Asako, the main vocalist and guitarist of SHISHAMO, in this particular song. The guys in the back also did good on the instruments, more specifically Watanabe Shuhei beautifully doing that memorable guitar riff you hear at the beginning of the song and how the other Shuhei recreated the trumpet part on the keyboard.

Everything about this cover is amazing, these guys are hella talented, and I can die happy now.

Before I happened to stumble upon listening to a few of Kalafina’s songs on Spotify a couple of days ago, I only heard about the group from fellow aniblogger, Moya from The Moyatorium. But when I actually started listening to their music with the limited knowledge I have about them, I instantly liked their sound. The incredible elegance and a sort of “epic” feeling you hear in this song thanks to things like the instrumentation, it’s just super, super nice to listen to. And I can’t not mention the voices of these three ladies, it’s like listening to three goddesses sing.

However if you want to learn more and read a way better analysis than what I just wrote about this group, definitely go check out Moya’s Kalafina tribute post!

The title of this song speaks for itself; it’s “FUN!”.

I think what I would categorize this song/artist as is definitely “light funk pop”. It’s a pop song incorporating funky vibes, while still having a feel-good and light-hearted mood to it. The youthful vocal performance of Rizumu Shin is probably what puts the cherry on the musical ice cream sundae, as his voice is really soothing and warm to listen to. Pretty much all the instrumentation in this song is great whether that be the combo of acoustic and electric guitar, the synth, or even that old-timey piano playing right at the end. Everything blends in with each other really well.

You most likely know who Kamishiraishi Mone is if you happened to watch the hit 2016 anime film Kimi no Na wa. I say that because she voiced the main female part of young, Itomori-raised Miyamizu Mitsuha. And as you may have noticed in that film, she has a wonderful sounding voice and also did a pretty darn good job portraying Mitsuha, given that she didn’t have much experience voice acting before (she is usually does live action stuff). Kamishiraishi Mone’s beautiful voice was also featured in her rendition of the ending theme to Your Name, “Nandemonaiya”. While I still love RADWIMPS’ version, it’s definitely a much different listening experiencing when hearing Mitsuha sing this song.

But let’s save Mone’s version of this song for another post, and focus on her solo musical career. I’ve been listening to her album “and…” over and over for the past couple of weeks (I want to review the album hopefully soon), it’s interesting to hear her sing different genres of songs whether it be a slow ballad or a very foreign-inspired track like “Sunny”.

“Cassette Tape” probably has to be my absolute favorite song on that album, as it beautifully showcases her vocal abilities and it’s just a fun and uplifting song to listen to. It’s not too slow, it’s not too fast, it’s a very upbeat and happy track. All the instrumentation like the trumpet, the drums, the subtle electric guitar, all mixed in with Mone’s INCREDIBLY BEAUTIFUL voice, it’s a real joy whenever I listen to this song.

I discovered the rest of his music on Spotify, and it’s definitely on the same level of enjoyable as “Rain”. Particular this song, “Ai”, was one of my favorites off his All Time Best album and damn… it’s one heart-warming song to listen to. Motohiro Hata’s vocal performance steals the show in this track; incredibly beautiful voice he has and it’s very apparent that he can hit those high notes very well. I’ve always been a fan of acoustic pop music, and this mellow ballad is a great example to listen to.

I learned about this song acapella cover duo Groovy groove from my good friend Leap250, and since then, I’ve been listening to their past work and also keeping up with their newest cover releases on YouTube. These two have covered a ton of popular music already such as Aimer’s “Kataomoi” and they even did a Boku no Hero Academia theme song mashup. Even though I never was into the acapella style of music, I still acknowledged and enjoyed the unique type of making music. I think Groovy groove has re-lightened my interest in acapella since they do such a good job doing it. I don’t exactly know who is who but if I’m not mistaken, Shige’s impressive beatboxing and bass replication combined with Mori’s really nice voice makes for a great musical duo to listen to.

They recently covered Yorushika’s “Say it.”, personally one of my favorite tracks from n-buna and suis, and it was interesting listening to this particular version. While there isn’t the memorable electric guitar riff and overall rock vibe to it, Groovy groove’s version is a lot more mellow. But even then, I think this cover is pretty spot on and very similar to the original song. They did a great job!

I think those are enough songs to indulge for the week. I wanted to post this at the end of this week but I was just too excited to start this segment (lol).

Hope you enjoyed this week’s round-up of J-music! I honestly am not sure if this will be a weekly segment, but I’ll try my best to gather up a list of songs for you guys every week. By the way, I have been accumulating J-songs on a Spotify playlist for a while now, and if you’d like to take a peek at this random mix of music (which will be updated very frequently), go ahead and click on this link!

And of course, if you have any J-music suggestions of your own, feel free to share them in the comments. I’m always open to new songs to listen to!