I don’t really express it much, but I’ve been a pretty big admirer of food… if watching tons and tons of food YouTube channels/videos counts as “admiring food”. But really, channels/content creators like Feast of Fiction and Binging with Babish, alongside actual food-based companies such as Bon Appetit or SORTED Food, I really enjoy what all of those individuals showcase. But even though I’ve somewhat learned tons of different recipes and techniques from those YouTube channels… I don’t really cook at all. It’s more like my lovely mother insists on doing the cooking for the family, and a bit of me being lazy lol

The visual representation of food in anime has been pretty darn impressive in recent years, whether that be in various slice-of-life anime or shows that actually have a focus on cooking and food. One of my favorites doesn’t exactly fit in those examples, but it’s absolutely worth mentioning the incredible art direction Shinkai Makoto went towards in a scene for his short film, The Garden of Words. The way he shows different cooking aspects like cutting vegetables, how the food looks gorgeous and super appetizing, or even seeing the steam coming out of a piping hot dish; my goodness, that is a superb way of expressing food and cooking in anime. (You could also say the same in Kimi no Na wa with the cafe/pancake scene)

That being said, I’ve seen many anime that feature mouth-watering dishes that both are interesting to watch being made and make it seem pretty easy to cook. Today, I’d love to talk about some food from various shows that I’d love to try eating… and maybe actually cooking.

Omurice is probably one of the most iconic/well-known dishes in Japanese cuisine, and it sounds like such a simple thing to make. Eggs on top of fried rice (with other various additions like onions or meat); I feel like, really, anyone can make it for something to fill themselves up with. It’s been shown in tons and tons of anime such as The Garden of Words, Kobayashi-san Chi no Maid Dragon, Mob Psycho 100, and I assume other shows that I haven’t seen. I think what makes it well-known in the entertainment side of Japanese culture are the different drawings of cute pictures or words made out of ketchup. You also usually see those at Japanese maid cafes.

Problem with myself is that I’m allergic to straight-up eggs (and a bunch of other things for that matter), plus a minor fact that I really really don’t like ketchup or any other popular condiment for that matter. But if I weren’t allergic to eggs, I would gladly try omurice. 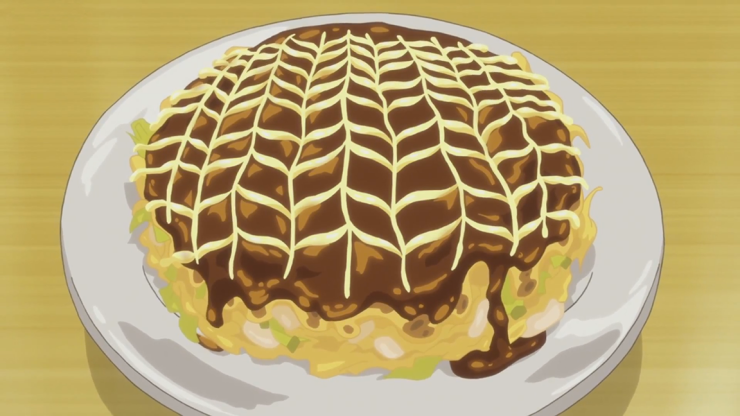 If you’re unfamiliar with the anime Amaama to Inazuma, it’s a heart-warming slice-of-life revolving around a single, busy father who has the desire to learn how to cook and make incredible dishes for his young daughter, rather than repeatedly buying her convenience store bought food. It’s honestly one of the best slice-of-life anime I’ve seen and the intriguing inclusion of step-by-step cooking in this show, I would suggest giving it a try if you’re in the mood for something sweet to watch.

One of the dishes featured in that anime is okonomiyaki, a savory pancake dish made up of your usual pancake elements like flour and eggs, but also includes various ingredients ranging from meat to vegetables. Actually, the word “okonomiyaki” literally means “grilled how you like it”, implying that you can pretty much add anything your heart desires in this dish. I’ve had something similar to this in Korean cuisine (Pajeon, as they call it I think) but with Japanese ingredients being included and the fact that you’re free to add anything you want in it, it would be cool to experience eating this Japanese dish.

Aaaand, cooking YouTube channel Binging with Babish actually recreated the okonomiyaki dish from Amaama to Inazuma so if you’re interested in learning how to make it, you can go check that one out. I know I shouldn’t really be sharing a recipe video like his since he’s not a native Japanese person, but I respect Andrew Rea a lot and I think he’s legit.

Despite me hearing all the good things about the Fate franchise (especially the mobile game), I actually have never seen any of the anime featured in it… and no, I wouldn’t call Carnival Phantasm and Emiya-san Chi no Kyou o Gohan real Fate shows.

But I’ve been kind of following the second show I mentioned, where the Fate universe is set in a comfy and gentle atmosphere and we see Shirou’s great cooking skills come into play. This on-going show is pretty nice to watch, not only because it’s light-hearted and is overflowing with slice-of-life vibes (and the cute and pleasant art style). But also, the interesting way they show food being made, and even the dishes themselves. They’re very Japanese-focused, and it’s interesting to learn all about the different kinds of food I’ve never even seen or heard about.

One of said dishes is ochazuke, shown in episode seven. It’s considered one of the most traditional and basic Japanese dishes since it really only consists of two ingredients; them being tea poured on top of rice. But you can also add various ingredients to them like cooked salmon, ginger, konbu (salted kelp), to really add some more flavor to the mix, plus you can switch up the kind of tea you use (green tea is usually the standard for this dish). I did some research and it’s a dish that is supposed to be a quick meal and really just something to fill you up rather than a proper meal. 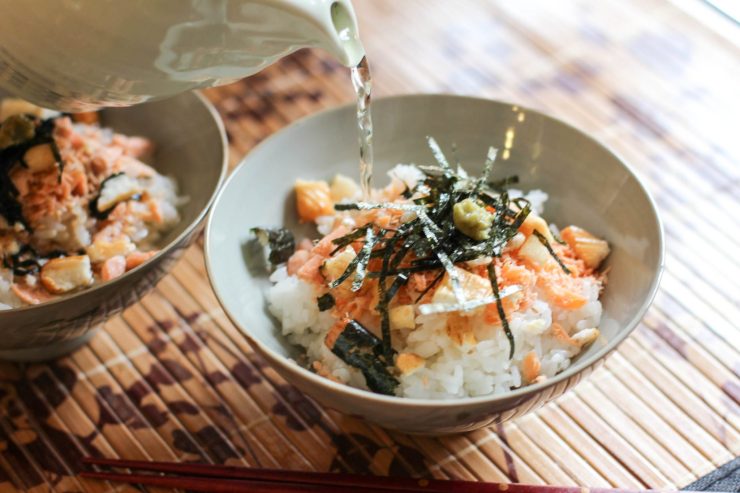 At first, I wasn’t really intrigued by the idea of just eating a bowl of rice submerged in tea, but since I’ve garnered a love of green tea recently, it doesn’t seem like a bad thing to at least try. Plus, the endless combinations of additional ingredients you can add sounds like it can really help with the flavor and overall enjoyment. And looking back at that clip from the anime, it looks like it can be a real refreshing thing to eat on a hot summer day, replacing hot tea with a more colder version.

Now I have no idea if I will ever go camping… but if I do, I’ll probably try out this recipe just for the fun of it. 😛

As Rin-chan says it in the clip, it’s a very simple dish to make. A few veggies, pasta, water, and different other delicious ingredients that add more flavor, cooked and eaten in only one pot? Me being a lazy person, this sounds like the perfect dish. Eating hot soup on a cold day is always a blessing to experience, and this easy single-serving dish sounds like a great meal to have whilst relaxing and camping.

…however, camping equipment may be on the more expensive side of things.

Confession: I haven’t seen this show. But after watching this clip… god damn, this looks like a really fun cooking anime to watch 😛

I’ve only heard of this dish since I watched another YouTube channel, Feast of Fiction, re-create it, and it looked like a really nice dish to eat. Mashed potatoes wrapped in bacon with a nice sauce to top it off; when you read that, it doesn’t sound that exciting but thankfully Shokugeki no Souma brilliantly shows off and explains the cooking process that can absolutely make your mouth water for this dish. It sounds like a fairly simple dish, yet it can be made so elegantly.

And that’s all I wanted to talk about today!

I had fun talking about some foods I’ve seen in anime, and also doing a little bit of research to learn a bit more about them. If you were expecting some legit fictional food to be shown on this list, I hope I didn’t disappoint you too much. However, you can pretty much cook any of these dishes at home and maybe you’ll find something new to enjoy eating!