As you probably know, I love the Japanese anime voice actor/actress culture immensely to the point where every time I start a new show, I sort of play a little game where I try to figure out if a seiyuu I know is playing a character and guess who it is. If you want an even bigger example of my love for seiyuu, I run two Instagram accounts where I post various photos of voice actors and actresses (one being Love Live-based, the other being general seiyuu). Oh, and I also do a segment on this blog called Seiyuu Spotlight.

Today I wanted to talk about a few particular “rookie” voice actresses from some anime I’ve seen in recent months (most of them being CGDCT-kind of shows) and who are fairly new to the anime industry. These seiyuu I’ll be discussing, I truly believe they have a great amount of talent and potential to be great in the future. This list, like the title says, will only include female seiyuu (for reasons that I think is obvious given my taste in anime) but I will definitely consider compiling a list similar to this with male voice actors!

One last thing: this is not meant to be a “ranking” list and I don’t intend there to be a specific order from best to worst. All of them are great and ranking them is unnecessary. Let’s jump right in!

I have talked about this wonderful woman before in my TriviAqours series of posts I did with fellow Love Live seiyuu fan Leap250 but I think when we’re talking about rookie seiyuu who have talent and potential, Ainya is an excellent choice. Most probably recognize her voice from the Love Live! Sunshine!! series where she played the energetic, lovable “Engrish-speaking” member of Aqours, Ohara Mari. Mari-chan essentially being her first major role in an anime, I definitely believe her future character portrayals are rooted from her character in Sunshine!!. We definitely hear the familiar loud, spunky, and energetic kind of voice when hearing some of her other roles like Jashin-chan from Jashin-chan Dropkick, Byakko in Release the Spyce, and Shioi Rina from Mahou Shoujo Site.

I think because of her abilities to yell and shout and put so much energy in doing these kinds of roles, Ainya could and should be an excellent option when casting for characters with a similar personality. Plus, the girl can sing really damn well (given she’s in a popular idol group like Aqours). But in addition to that, if you didn’t know, she is quite skilled in the “Min’you” style of Japanese music and can absolutely hit very high notes. Overall Ainya is full of unique traits/behaviors in her acting and singing skills and I’m really glad she’s gaining more attention from anime studios recently. 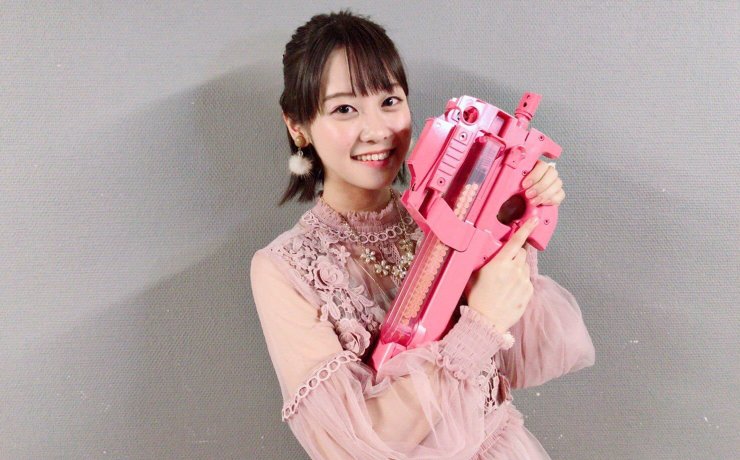 I think I have to thank the Love Live franchise, not only for being the main reason why I got sucked into the seiyuu culture, but also introducing me to very talented voice actresses I’ve learned to love. One example of that is getting involved and learning more about the newest school idol group after μ’s and Aqours, the Nijigasaki High School Idol Club (or what most people know it as, the Perfect Dream Project group). PDP is still fairly new and unrecognized within the Love Live community but after their first album release and the great amount of content the seiyuu group has been doing for the past few months, I think they’ll be able to gain some attention soon enough.

There are a ton of talented souls from the PDP group I could choose for this particular pick such as Kito Akari (Kaho Hinata from Blend S) and my personal favorite, Kubota Miyu (Medusa from Jashin-chan Dropkick), but there is one seiyuu that has definitely caught my eye with her great amount of talent… and that is Kusunoki Tomori.

I’ve talked about her in a previous J-song roundup but this post gives me a good chance to elaborate more on her impressive skills as a seiyuu/idol. Most of you recognize her as she has been involved with popular franchises like Love Live’s and even Sword Art Online where she played the main role of LLENN in SAO Alternative: Gun Gale Online.

While Tomoriru does convey a more cutesy, childish voice there (her role as Kotetsu in Anima Yell also reflects that), her performance as Yuki Setsuna in the Perfect Dream Project has her projecting a more mature and passionate kind of voice. That’s a great segue into my next point, which is that she has an incredible singing voice, as shown with her performance in Setsuna’s solo song, “CHASE!”.

And to top it all off, what amazes me and makes my jaw drop about Tomoriru is that she’s had major involvement with these A-list franchises and anime studios, yet she’s only 19-years-old! It’s pretty incredible to see the amount of skill she has at such a young age, and it’s only the beginning of her success.

If you’re like me and thought that surely nobody could surpass certain voice actresses like Ogura Yui and Asumi Kana in being the most “moe” or cute-sounding voices in all of anime… this choice may change your mind.

After debuting in 2014 and being granted minor roles in anime, Naganawa Maria became a household name after portraying the character of Kamui Kanna in the hit KyoAni slice-of-life comedy Kobayashi-san Chi no Maid Dragon. There, Naganawa definitely did a great job performing as an adorable child, thanks to her naturally high-pitched voice. That breakout role essentially gave Maria-chan more anime role opportunities such as Sengoku Kamuri in Slow Start (who is literally Kanna 2.0) and of course, the lovable Platelet-chan in Cells at Work.

Naganawa Maria is interesting since despite now being considered a “typecast” kind of seiyuu (basically meaning she’ll probably be mostly casted to do roles that are very similar to Kanna and Platelet-chan), she definitely has the ability to portray that kind of character very well. I personally haven’t really seen that many seiyuu who can do such a genuinely enjoyable high-pitched and adorable-sounding voice for a character other than the two seiyuu I mentioned earlier (Ogura Yui and Asumi Kana) so having Naganawa come into the anime scene is great to see… or hear, in this case lol

I hope I can hear her in more anime, maybe even doing a much different kind of vocal performance than the ones she’s used to.

Let me just say that this particular voice actress was the main reason why I wanted to do a post like this.

Kino Hina is… incredible. Most of you probably know her as the voice of Hanako in the hilarious comedy Asobi Asobase, which aired back in the summer of 2018. I included Kino Hina-san because of the mind-blowing acting performance she did in that show. If you haven’t seen Asobi Asobase yet, her character of Hanako acted very energetic, loud, dumb and goofy and Hina-chan ABSOLUTELY KILLED IT when portraying her. The fact that she is able to do these high-pitched screeches or change the tone of her voice immediately when Hanako does some stupid act or just act like a hilariously goofy-ass person, it was super impressive to hear her do this.

Her performance in that show quickly made me realize how talented of a voice actress she is and I see so much potential in her acting career. Not only being a silly high school student, but I could totally see her be in some kind of action or even horror-based anime where she can scream and shout with a ton of energy (in a more serious manner) all she wants.

Out of all rookie seiyuu I’ve heard from, I believe I have seen probably 90% of the shows Konomi-san has been in. It might be some sort of coincidence but despite that, I think I’ve realized how talented of a seiyuu she actually is. One of the most notable things I’ve noticed about her list of anime roles so far is that she has a pretty nice vocal range. On one hand, she can do a more quiet and reserved kind of voice really nicely with characters like Mizuno Akane from Tsuki ga Kirei or Kanou Koyomi in Yagate Kimi ni Naru.

On the other hand, she can do a waaaaay more “genki” and energetic role such as Mina from Karakai Jouzu no Takagi-san, Kirin in Gakuen Babysitters and more recently, Fujiwara Chika from Kaguya-sama: Love is War.

Overall, I think Konomi-san is quite a nice voice actress and it shows that she has the ability to do different kinds of characters in anime. She’s definitely been gaining a lot of attention of recent, as she has been casted to play Fujiwara Chika in Kaguya-sama, as well as Kai-chan in the Hitoribocchi anime adaptation, so I’m very happy for her!

And because we’re talking about Konomi-san, why wouldn’t I include this amazing ending song from episode 3 of Kaguya.

Aaaand that’s all I gotta say for today!

There are a ton of rookie seiyuu I could’ve talked about, but we’d be here for hours and probably another 1500+ words would be written. But I hope you found this post interesting and possibly informative about these particular voice actresses!

Also if you have a rookie/newbie seiyuu you really appreciate, feel free to tell me in the comments!