The Kabe-don: Do People Actually Do This?

Hi there and Happy Valentine’s Day! Even though I don’t have a significant other to spend time with today, I still find this holiday intriguing, as I am very much a fan of good romance narratives. But however you celebrate it, whether it being with your loved one or just eating chocolate by yourself, I hope you find this day to be an enjoyable one.

Because of the special occasion, I wanted to post another romance-related discussion which, by the way, is written by a guy who has absolutely no experience in romance/dating! But don’t worry cause surely my huge interest/love for romance anime makes me qualified to talk about a topic like this… right?

All jokes aside, my last romance discussion about indirect kisses (inspired by Doga Kobo’s 2018 romance comedy Tada-kun wa Koi wo Shinai) surprisingly got a lot of attention and it seemed like a good amount of people enjoyed reading that post. So, thanks to a particular anime airing this Winter 2019 anime season, I got another topic to discuss a bit about. Let’s just jump right in!

One of the most well-known (and joked about) trope in romance anime is the classic kabe-don. Originating in none other than Japan, “kabe” translates to “wall” while “don” is the sound when someone slaps their hand onto said wall. You may be asking, “why would someone slap their hand onto a wall?”. Basically, this action is expressed as a romantic/confrontation gesture, when a person (usually a guy) pins another person (usually a girl) against a wall and slamming their hand/arm right next to them. 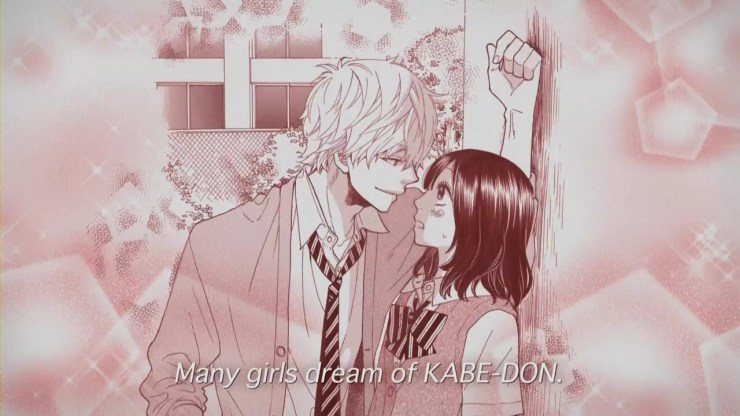 In the context of shoujo manga, this action is done by men out of either jealousy, anger/frustration, or it just having a flirtatious tone. The sudden action of confronting their love interest shows that they are pretty damn serious about wanting to create a relationship with the person they’re “kabe-donning”. It also is supposed to make the guy look “cool” and “tough” while the innocent-looking lady becomes a bit scared yet a bit aroused. The kabe-don, while it is a very common trope within anime/manga, it has also become somewhat of a meme around the Internet, parodying and creating new and unique ways of doing the kabe-don; and even some comedy anime poking fun at it.

The reason why I bring up this romance anime/manga trope is that a currently airing anime called Kaguya-sama: Love is War brought up the subject in one of the segments in episode 2. To sum up/remind you of what that scene was, a guy came to student council president Shirogane Miyuki, asking for advice about confessing to a girl he likes. Shirogane, being a person who never was in a relationship beforehand, tried his best (and spoke with incredible confidence) at helping his fellow male while vice-president Shinomiya Kaguya secretly listens in from outside the student council room. Shirogane suggested and gave an example of doing a kabe-don on the room’s door, coincidentally where Kaguya was behind, where she became shocked and embarrassed at the sudden action… it’s better to understand if you actually watch the scene.

As I watched this scene (entertainingly) unfold, it got me thinking: is this legitimately something people, most likely in Japan, do when in a situation involving confession or romance in general?

I think the answer is a little obvious, but let’s just dive a bit deeper in this matter anyway.

There are a few reasons why the kabe-don has become popular in recent years; one reason even dealing with how eastern Asian males could be good-looking and cultured but don’t have a sense of “sexiness” or romantic impulse to complement it so being able to kabe-don solves that problem (according to an article from Grazia). But I think one of the more prominent reasons why the kabe-don is so well-known is that it pretty much fulfills a lot of young women’s fantasies. Some ladies would love to be confronted and swept off their feet by a mature man, some ladies just like to see the dominant characteristic in guys. With it being so prevalent in shoujo manga, I can definitely see more and more young women being interested in the idea of being “kabe-donned” by the man of their dreams.

But, it seems like this romantic gesture shown in fiction isn’t used by many people in the real world… and I’d assume for good reason.

The thought of some guy/girl pinning you to a wall unexpectedly and having a sense of dominance towards you sounds, uh, a little creepy, don’t you think? Not a lot of people would genuinely be okay with this kind of action being used towards them since it obviously puts their minds in danger and it pretty much is considered sexual harassment, especially if you do it to some random stranger/an unsuspecting person.

Thankfully, according to Yabai.com, the kabe-don is not something a ton of people in Japan do; as a matter of fact, Japanese men are very respectful to women, more specifically women they don’t personally know. I would assume Japanese teenagers do it as a joke with their friends or maybe even serious love interests might perform this action but as I suspected, it’s not some common tactic people to try to do in order to woo a person you’re romantically interested in. It’s just… not a normal thing to do.

However I can say that it definitely is enjoyable to watch in Japanese media such as anime or manga, whether it’s in a legit romance drama or it being used as a gag in some comedy anime.

That’s all I really got to say about this interesting trope in Japanese anime/manga! Hope you all found this write-up interesting to read about, especially on a day like Valentine’s Day. I really do enjoy talking about romance, and I hope to do it more frequently than usual.

Lastly, I would love to know what you think about the kabe-don. Should it be seen as wholehearted or an act of harassment? Would you actually do it to a serious love interest? Feel free to leave any thoughts in the comment section!

6 replies on “The Kabe-don: Do People Actually Do This?”