I’m not much of a manga fanatic (although I feel like I am slowly becoming one) but there is one series that I stumbled upon and loved reading, and that is Katsuwo’s Hitoribocchi no Marumaru Seikatsu. A fun, wholesome manga about a middle school student who has an extreme case of social anxiety, as she prefers to avoid people in general and tenses up when interacting with someone to the point where she vomits. After finding out that her best-and-only friend, Yawara Kai, is attending a different school from hers, she now has to fulfill a promise she made to befriend everyone in her class, or else she and Kai-chan will no longer be on speaking terms.

There are a ton of reasons why I (and many others) LOVE the Bocchi manga. It’s wholesome, cute, the comedic jokes are perfectly timed and funny, and the characters and the friendships developed between them are great to read about. Another thing that stands out about this manga is the actual names of these characters. While they look like normal names a person can have, when you translate them and find out the literal meaning, it perfectly reflects their personality/behavior/character. For example, our main character’s name is Hitori Bocchi which is derived from the Japanese phrase hitoribocchi (meaning “all alone”). Another funny name is from a foreigner character named Sotoka Rakita, derived from soto kara kita (meaning “from the outside”). Very, very clever name choices and I love how author Katsuwo did that.

So naturally when I found out a few months ago that there would be an anime adaptation of Bocchi’s journey to make friends, I was immensely excited. And after waiting for months and months, last Friday was the premiere of the first episode! That being said, this post is just gonna be my initial thoughts on the adaptation and a brief rundown on how I think it compares to the manga.

For a first episode, they covered a good amount of the beginning of the manga (about 2 chapters) and I believe they stuck with the source material for the most part. Do I expect them to adapt the manga one-to-one? Of course not but all I really want is for them to introduce most, if not, all of the different people Bocchi meets in her class since all of them are interesting in their own ways and are worth showing off in anime form. Seeing their personalities come to light in both animated and voiced form would be amazing to see.

Speaking of animation, the art/animation is something I’d like to comment on. I have never heard or seen any anime by the studio animating this series, C2C, but the overall look of Hitoribocchi is pretty good. However, it doesn’t exactly reflect the original art style of the manga, which is something I’d prefer. I love author Katsuwo’s art style for the characters; it’s fun, cute and pleasant to look at; even one of their other manga series, Mitsuboshi Colors, was adapted into an anime by studio Silver Link that perfectly replicated Katsuwo’s art style. So while I don’t think C2C is a bad studio because they didn’t do that, I would’ve strongly preferred them to make it look more like the original, like how Silver Link did with Mitsuboshi Colors. 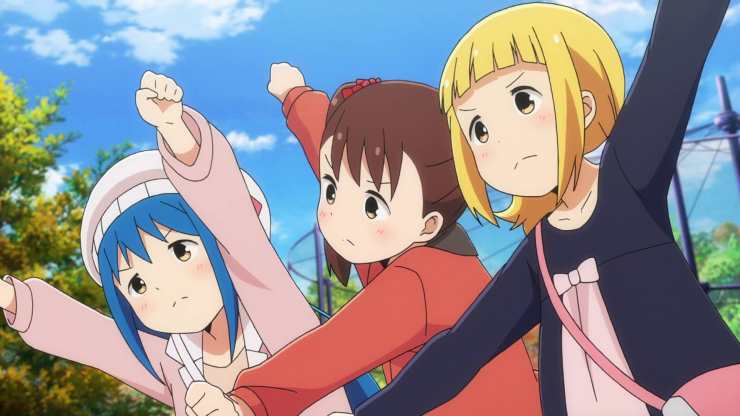 Since I like to talk about seiyuu, let’s talk about the casting for a second. I thought the casting choices were excellent. Hitori Bocchi is voiced by Morishita Chisaki, who seems to be completely new to the voice acting industry since she has no other anime roles on her MyAnimeList page. I believe she portrays Bocchi well and does a great job acting as a young middle schooler who has trouble talking to others. There are a few other people I would’ve considered to cast as Bocchi if I could (absolutely no disrespect to Morishita Chisaki, in no way do I mean it like that) such as Hikaru Akao who already greatly voiced a timid girl in Comic Girls, and possibly even Minase Inori. But other than that, the other voice actresses chosen were pretty good like Tanaka Minami as Sunao Nako (Hoshikawa Lily from Zombieland Saga) and Kohara Konomi as Kai-chan (Fujiwara Chika from Kaguya-sama: Love is War).

But one casting choice that blew my mind and thought was so PERFECT was Kito Akari playing Honshou Aru. Most will probably know Akarin as Hinata Kaho from Blend S, Himesaka Noa from Wataten, and if you’re currently watching ufotable’s new show Kimetsu no Yaiba, she voices Tanjirou’s sister Nezuko. Why did I think this was perfect? Well, given some of her previous roles like Kaho and Noa, Akarin can absolutely portray a happy-go-lucky young girl. And if you read the Bocchi manga, you would know that Aru is just a girl who wants to make people happy and always give positive vibes. So giving Akarin the role of Aru is like giving a basketball to someone elite like LeBron James: they will exceed in their performance. (also sorry for the basketball comparison, I like sports lol)

*yes, Blend S is about fanservice but please, ignore the dumb clickbait thumbnail and just watch it for Akarin’s vocal performance lol

That’s all I really got to say about the first episode of this show! I’m so glad this got an anime adaptation and I hope this becomes a fun and adorable show throughout the Spring season!

What are your thoughts on this show, if you’ve seen it? I’d love to hear your comments.