Sounan Desu Ka? / Are You Lost? 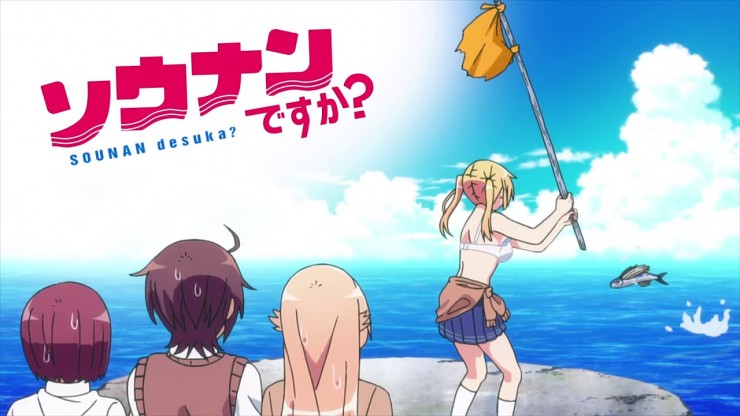 Due to unfortunate circumstances, four high school teenage girls just trying to live an average and fun life, find themselves all alone and stranded on an deserted island. Luckily one of the girls, Onishima Homare, is highly trained in the art of survival and essentially guides the other three girls in order to adapt to their situation to survive by doing things such as eating cicadas or finding ways to stay hydrated.

Well, let me say first that this show, like the Dumbbell anime, is an “edutainment” kind of anime, as Homare shows and teaches the rest of the ladies the different ways to find food, build shelters, find water, etc. I actually thought this aspect was expressed pretty well, and while I don’t know a thing about surviving in the wild, it sounded like they knew what they were talking about. I can’t remember off the top of my head but things like explaining why you can’t rely on sea water as a main drinking source or which parts of a cicada are the most nutritious… it actually sounds legit. 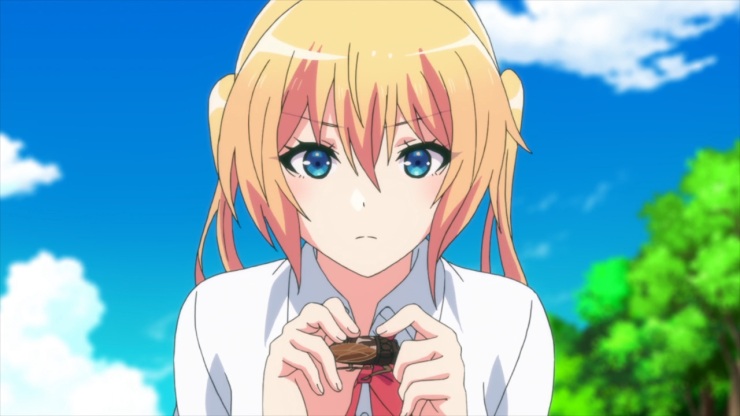 Other things such as the fanservice is fine but my personal problem with it is that it just might not be my kind of show. Not a lot really stands out to me, whether that be the comedy or the characters themselves; at least they aren’t interesting or entertaining enough for me to care for 11-12 more episodes. Sure, the survival educational part is amusing but I don’t think it’ll be enough to keep me watching. 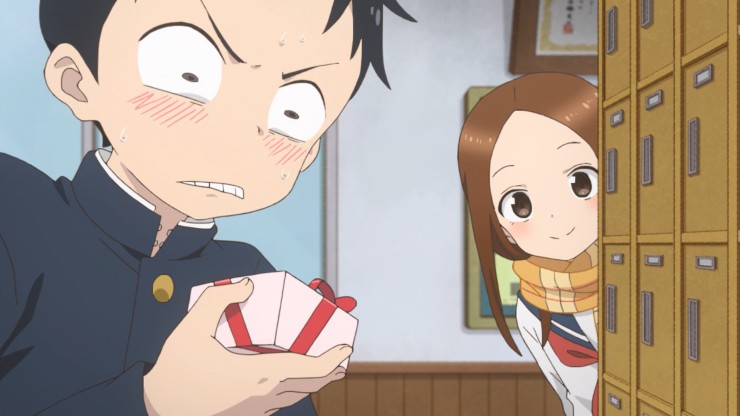 I never finished the first season of this. So you might be asking, “why are you even watching it then?”.

Well, a part of it is just to enjoy voices that are featured in this show such as Takahashi Rie, Yuki Kaji, Kohara Konomi, Ogura Yui, etc. Another part of it is that the Ashita wa Doyoubi trio is actually what I’m looking forward to, rather than the Takagi-Nishikata shenanigans. But I still wanted to address something interesting about this show.

When Takagi-san S2 was announced, I was hoping they would include/adapt the spin-off manga of this series, Karakai Jouzu no (Moto) Takagi-san, where (spoiler alert) Nishikata and Takagi get married later in the future and have a child by the name of Chi. I actually enjoyed reading that spin-off and seeing the new yet familiar lives of Takagi and Nishikata with the addition of their energetic and amusing daughter. I think because those two are older and the personality of Chi is added into the mix, the whole teasing shtick becomes more entertaining and wholesome to me within this spin-off. Those things certainly add a lot more spice to this series’ whole comedic concept, rather than just seeing the super predictable jokes with the younger Takagi/Nishikata.

But, it looks like we’re not going to see Chi this time and they’re sticking to their usual guns for season 2. The whole “Takagi teases Nishikata and Nishikata never gets to win, rinse and repeat” comedic routine got old quickly and that’s the main reason why I didn’t finish the first season. Sure, it’s cute and all but I’ve definitely realized throughout the years watching many boring moe anime (and I can list a lot of them) that cuteness can’t carry a show on its own.

Oh but I’m definitely looking forward to hearing all the cover songs Takahashi Rie does for each episode ED. It’s been great so far! 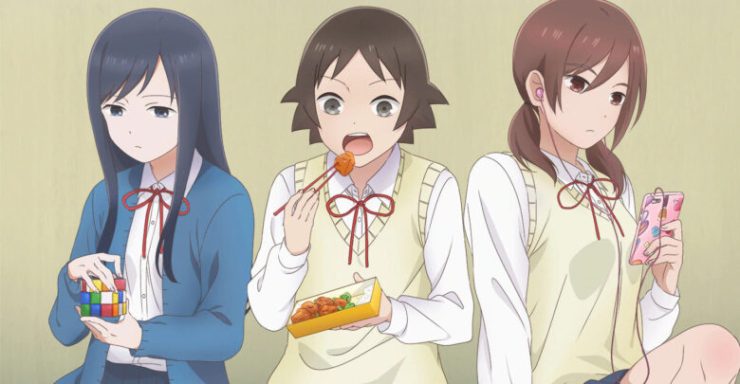 If you have seen and enjoyed those really dumb yet hilarious comedy anime such as Nichijou, Daily Lives of High School Boys, Asobi Asobase and/or Kill Me Baby, this show is VERY similar to those and is a must watch.

We follow a group of high school girls, all with distinct and trope-like personalities, just live their school lives and waste time. While that premise absolutely doesn’t sound interesting at first, these kinds of shows really rely on the comedy, which Joshikousei no Mudazukai does pretty darn well so far. Watching the main trio of Nozumu/Akane/Shiori and just hearing the dumb shit Nozumu says all the time has been very amusing, as well as how the character interactions have been expressed. Speaking of character interactions and characters in general, I think that’s something notable to talk about. Since this show does include a large cast of characters, I honestly thought they introduced all of them (or at least most of them) in a great and clever way, just in the first episode. Giving each classmate a sufficient amount of screentime and making Nozumu’s interactions with them memorable and funny; I actually remember which one is “Majime” or “Yamai” or “Wotaku”, etc. 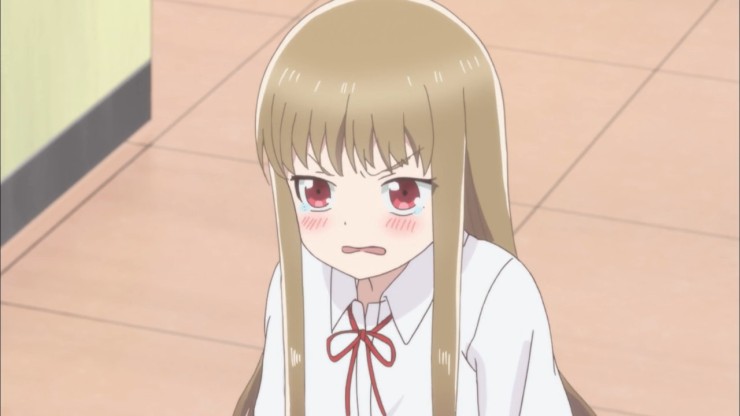 Another notable thing to mention about this show is the voice cast. There are some pretty notable veterans and more younger seiyuu included, which turns out to be an amazing mix, as they all portray their characters very well. Vets like Toyosaki Aki, Tomatsu Haruka, Akasaki Chinatsu within the main trio, and the more younger ladies such as Takahashi Rie, Tomita Miyu, and Naganawa Maria being featured as side characters; I applaud whoever did the casting in this anime.

Also the opening song is definitely one of my favorites this season. It’s SUPER catchy.

UchiMusume / If It’s for My Daughter, I’d Even Defeat a Demon Lord 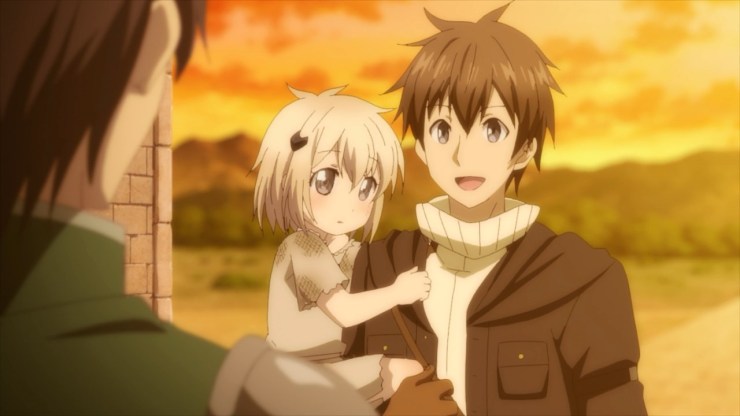 This one I specifically saved for last due to the, sort of, controversy surrounding it, which I will address in a second.

Young and highly skilled adventurer Dale one day finds a small demon girl in the forest, all alone and without a loved one to depend on. Not wanting to just leave and let the child die, Dale takes her home and ends up adopting the absolutely adorable Latina, while still trying to find out where she came from and why she ended up in that unfortunate situation.

Before I get into the main topic of discussion, let me talk about the show itself; I actually really like it. Anime about parenting or an older person taking care of a young child due to unfortunate situations the kid had to deal with has been one of my favorite to watch, just because it’s very wholesome and heartwarming to watch. Shows like Amaama to Inazuma, Gakuen Babysitters, and my all-time favorite Usagi Drop, those shows and its concepts are probably one of the reasons why I adore the slice-of-life genre. And UchiMusume could be another example of the whole “parenting” slice-of-life idea. We see that Dale truly does care about Latina in the first couple episodes and watching Latina adapt to a new life, experiencing new things such as learning a new language or helping out at the inn… as I said, it’s very wholesome.

Plus, come on. Latina is without a doubt a cutie. 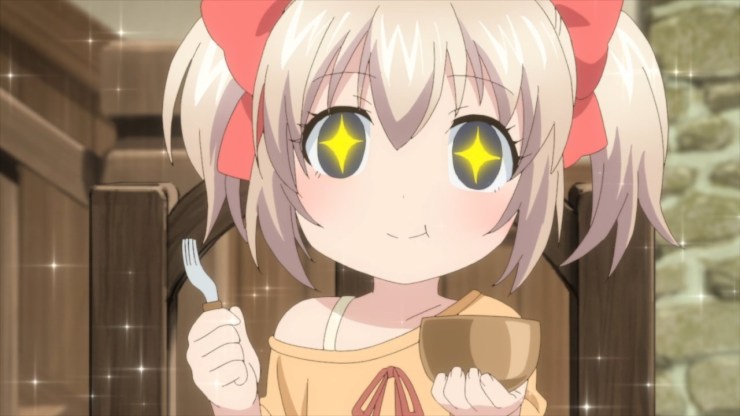 But this series does have a pretty controversial ending and I will have to give a BIG spoiler warning (as well as one for Usagi Drop), so proceed with caution. Basically towards the end of the manga shows Dale and Latina having romantic attractions to each other as Latina is older, resulting in the two getting married. I haven’t read the manga and I simply couldn’t get away from the spoilers before the show aired so when I first heard about it, I had mixed feelings.

I don’t want to go too in-depth with this (because I actually might want to write a post regarding this whole idea) but the concepts of age-gap romance and incestual relationships are two narrative ideas I don’t particularly enjoy. Obviously like many people, I view it as two huge taboos in society and while I would never discriminate or hate on people who are relationships like that, I still wouldn’t agree with it. That taboo belief is why the ending of the Usagi Drop manga was not perceived as a good one, as it pretty much had the same conclusion as the one I described for UchiMusume.

However, if you watched the Usagi Drop anime, you would know that they did not even hint or mention what would happen later with Rin and Daikichi which was a good decision overall. Now looking at UchiMusume, I simply just want it to go the Usagi Drop anime route and just focus on the parent-child relationship and their pure lifestyle as a family. That’s the ideal direction, and I think that’s what most would want. However, if this anime does show off that future relationship between Dale and Latina… basically I just want to enjoy the moment and the wholesome slice-of-life scenes between those two, and I’ll have a “we’ll cross that bridge when we get there” mentality as I progress through this anime.

(…also if you want to read my pretty good Usagi Drop review on #moe404, click here!)

And that’s pretty much all I have for this season! There may be a part 3 if I end up watching a few more shows but I think I’ve said all I can. I am watching Vinland Saga but not caught up yet, but it’s pretty interesting so far.

If you want to know the shows that I’ve dropped, pretty much it’s been HenSuki and Machikado Mazoku (and soon Tejina-senpai and Sounan Desu Ka?). Those weren’t great… at all.

What are your thoughts on these airing shows? I would love to hear them in the comments!