Note: this post is part of a month-long event called The Animanga Festival, started by a fellow aniblogger, Auri of Manga Toritsukareru Koto! If you want to learn more about this event (and/or participate in it), check out my previous post where you can find the link to the full details (as well as if you missed out on what I wrote for my first entry) 😀

Today’s topic of discussion is locations from anime/manga that I’d be interested in checking out. I’ve never made a trip itinerary before so this should be fun.

Also, since I’m mainly a fan of the slice-of-life genre, a lot of these places I’ll be mentioning are based off real locations in Japan that anyone can visit. While it would be interesting to talk about, I decided not to include any fictional worlds like isekai settings or such, simply because I don’t know a ton of them.

That being said, let’s start our journey!

As I’ve researched a little bit on how to get my way around the wonderful country of Japan, it seems like the best option is to land in Kyoto where our first destination would be. After watching Kyoto Animation’s Tamako Market franchise, I fell in love with the location it was set in. Named the Usagiyama Shopping District, it contained a close-knit community of shopkeepers who were always friendly and cheerful to customers and to each other. As you watched the daily lives of these shopkeepers, you could tell that they absolutely loved doing their jobs and wouldn’t trade anything for it. The super positive vibe and interesting shops just made me want to walk around there and experience it all.

Usagiyama is apparently based off a real shopping district in Kyoto, it being the Masugata Shopping Street. Many people have done a pilgrimage to that particular area because of Tamako Market, and apparently it really does feel like you’re in the Usagiyama district. Not only because of appearance (and the loads of Tamako Market/Love Story and general KyoAni posters and art hanging around) but the people there really are friendly. Incidentally, as mentioned by u/FateSteelTaylor, the shopping district embraces the fact that they’re affiliated with the cute anime and welcomes those who come to their shopping district because of Kyoto Animation’s work. 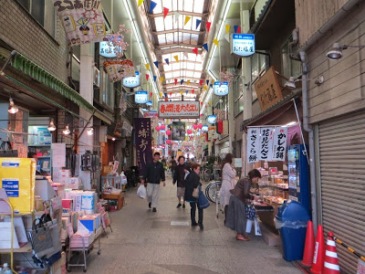 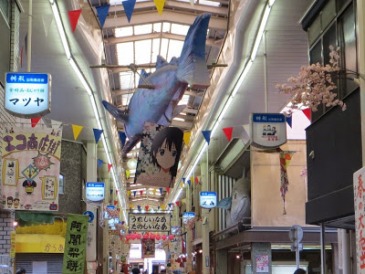 And if you’re wondering, while there isn’t a mochi shop right where Tama-ya is supposed to be relative to the shopping district, there is a store nearby that does sell mamemochi (the ones Tamako’s family sells).

Next up, let’s head up to Toyosato, Shiga, where we’ll be checking out another KyoAni location that I’ve ALWAYS wanted to check out. And that would be Toyosato Elementary School, the school that K-On’s Sakuragaoka High was based off of.

K-On! has meant so much to me as an anime fan since it was one of the first Japanese anime I’ve seen, plus it was what sparked my love for the slice-of-life genre and seiyuu culture. Being able to look at and walk around the school that made so many amazing memories for those five girls and its audience is something I’d be in absolute awe at. I mean, I would probably get chills if I walked up the memorable staircase to the club room or saw the five desks where they had tea and ate cake.

It seems like fans of the series have really shown their immense love for KyoAni’s work since there is an abundance of merchandise, posters, fan art, and physical anime/manga of the series that are in various rooms of the building; they even have all the band’s instruments on display. It’s just incredible to see all this love from the fans being put inside of the actual location the show is set in and the fact that K-On has impacted so many people. I’d really love to check out this school.

(all photos from MikeHattsu Anime Journeys)

Our next destination is a pretty long distance from Toyosato but let’s now head to the area that consists of Numazu, Uchiura, and Awashima. Or what most know as the location where the school idol group Aqours resides and the Love Live! Sunshine!! series takes place in.

Honestly, it’d be nice to see the more “countryside” of Japan before I go off to the big city of Tokyo. The smell of Uchiura Bay and walking on the iconic Mito Beach where Aqours trained for the Love Live! competition (and it’s mandatory to write “Aqours” in the sand), checking out the inn of Chika’s family, the long path of steps where the group ran up and down for practice; there are a ton of cool places from the show I’d want to see.

But the one place I REALLY want to check out is Izu Mito Sea Paradise, an aquarium that feature many marine mammals such as sea otters, sea lions, and especially dolphins. This was also the location where the music video of Aqours’ first ever single, “Koi ni Naritai AQUARIUM”, took place. But most importantly, the main reason why I want to go here is to meet its walrus mascot, Uchicchi, who has been referenced in the Sunshine series multiple times. I’ve always wanted to meet him in person and hug him, that’s all.

Finally, let’s go to the city of Tokyo. Other than wanting to watch a Tokyo Giants baseball game at Tokyo Dome, there are a couple places from anime I’d want to visit.

I think naturally as anime and manga fans, a lot of us would be attracted to the otaku heaven of Akihabara. Featured in many anime such as Steins;Gate, Oreimo, and Love Live! School Idol Project, this is a shopping hub for all things anime, manga, video games, collectibles, electronics and more.

Obviously you can buy all the otaku merch you want, but there are also other attractions such as checking out the famous Don Quixote store and the many cafe variations like maid cafes, anison cafes, the AKB48 Cafe and Store, and even a Gundam cafe.

Just being able to see the hectic and bright atmosphere of Akihabara, as well as seeing all the different otaku merch you can buy, would be something worth checking out… and you’ll probably have an empty wallet by the time you leave.

How about we take a break from all the walking around and sit down somewhere to eat. Well, somewhere in the mundane areas of the commercial district in Tokyo lies a small restaurant at the corner called Western Restaurant Nekoya. Yes, I would love to go to the restaurant from Isekai Shokudou.

Unfortunately it’s always closed on Saturdays, which is the day where the restaurant allows inhabitants from another world to eat there, so there’s no way I could meet Aletta and the other fantasy beings. Regardless, Western Restaurant Nekoya is still a restaurant in the real world and I would be honored to try out the delicious-looking cuisine from a legend like Tenshu.

…you know what? For the last location to visit on this list, let’s just go wild: 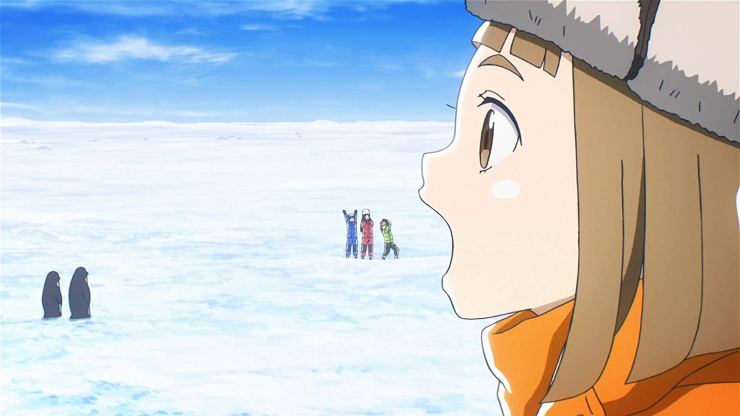 Obviously going to Antarctica is not realistic in many people’s lives and it sure ain’t easy to travel to but after seeing how entertaining and fun Kimari and the rest of the girls made this desolate block of ice look in A Place Further than the Universe, it sparked my interest a little bit. I would go for pretty much the same reasons why Kimari went, which was to break out of her anxious shell and try something new in her life.

Sure, you can go to some place with more things to do (and that is much warmer, may I add) but Antarctica is such a rare location for the common person to travel to so… why not take that opportunity if it falls on your lap? Plus, you know… I’ve always wanted to meet a penguin.

Well, that’s pretty much my dream anime location trip! There is actually one place from an anime that I wanted to include in the main list but I had no idea which city it would be in, and that is the Port Tower from Amagami SS. Why you may ask?

I hope you enjoyed this list, and while I didn’t include anything spectacular like places from more fictional worlds, I think it’s still really cool to visit locations from anime that are based off real life places. Actually being in those areas and imagining you’re in the shoes of the characters… it’s almost a surreal feeling, I’d assume.