I didn’t expect myself to be writing another post about Hoshino Gen this soon but I just had to because of yet another very special thing that happened recently.

Alongside the release of his brand new and first all-English single, “Same Thing” featuring London-based band Superorganism, Hoshino Gen and his management announced that his Tokyo Dome performance/concert from early 2019 would be available to watch on the streaming service Netflix. Oh, and not only on the Japanese version of Netflix… but also worldwide! When I first heard about this, I was very surprised but also very excited since I now had the honor and privilege as a foreign fan to experience a concert from a musician like him.

That being said, I just finished not too long ago so allow me to give my thoughts about it!

On February 27th-28th, 2019, Hoshino Gen performed at the famous Tokyo Dome, as part of his POP VIRUS tour around the country. Tokyo Dome, if you didn’t know, is one of Japan’s most premier entertainment venues, located in Bunkyo, Tokyo. While it is mainly used as a professional baseball stadium for the Yomiuri Giants, there have been some absolutely notable musical performances that have been shown throughout the years since its existence. Popular artists of different kinds like Mick Jagger, Michael Jackson, Madonna, Perfume, K-pop groups like BTS and Twice, Love Live’s μ’s and Aqours, Mizuki Nana; you can tell from this elite list of musicians and groups that the Tokyo Dome is truly a special place for entertainment. 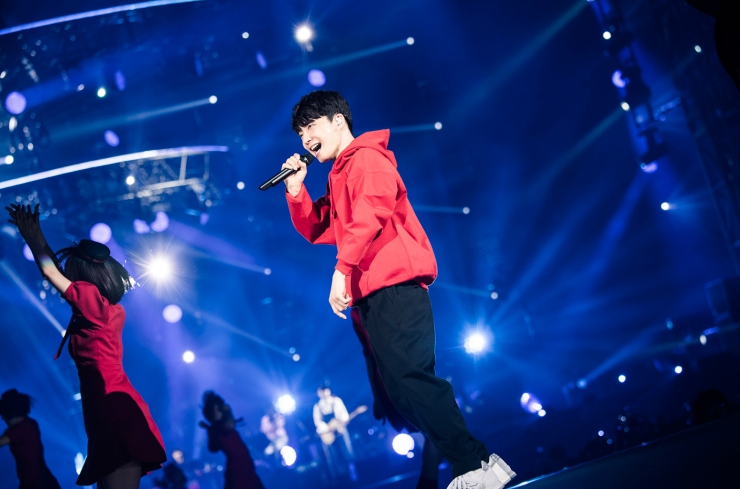 So Hoshino Gen performing at a venue like the Tokyo Dome, by itself, is a pretty cool thing to think about. But enough about where the concert was set at, let’s talk about the concert itself.

I’ll start with the obvious and most important part of this performance, it being the music itself. I gotta say, the set list was absolutely fantastic from beginning to end, and I’m not exaggerating here. Obviously a lot of the songs he performed were from his most recent album POP VIRUS, but he also included some old and/or obscure favorites as well. “Barabara”, “Why Don’t You Play in Hell?”, “Sakura no Mori”, “SUN”, “Bakemono”; I absolutely loved hearing these older songs being mixed in with all the new ones.

And even though I was very familiar with all of the songs Hoshino Gen and his great band performed in this concert, hearing all of them live rather than the usual album versions was such a different and amazing experience. I’m very inexperienced when it comes to live musical concerts but man, there were some songs where I preferred the live version than the original after watching it, one being “POP VIRUS” and “Hello Song”. I’ve realized that even the smallest changes while performing a song such as adding another voice for harmony or Hoshino Gen including a little improvisation… it definitely feels like you’re experiencing these songs in a brand new way, which I loved.

Speaking of improvisation, there was one significant instance of that that I found to be funny. The song, “Pudding”, includes a short section where they stop performing and have a brief conversation among each other. Instead of that conversation part only taking about five seconds in the original recording, Hoshino Gen and his band had a fun time discussing nonsense and messing around for about five minutes. I found that to be interesting and even though it took longer than expected, I can’t say it wasn’t entertaining to see lol

And that’s a good segue to the next thing I wanted to talk about, the MC part. “MC” basically means sections of the concert where the musicians take a break from performing and just talk to the crowd about stuff whether that be introducing the performers, thanking them for attending, or really whatever they want to talk about. The MC sections in this particular concert were nice to watch since a lot of them were just Hoshino Gen and his band talking to each other, which felt very natural and wholesome to me. I could definitely tell that this is a very tight-knit band and they really do enjoy performing together. There were other fun moments in the concert such as Hoshino Gen’s alter-ego Nise Akira performing alongside him for a song, and a short sketch that featured… well-known anime voice actor Miyano Mamoru? (Yes, I just said that :P) But I won’t say anymore since I don’t want to spoil it.

Other than that, the other aspects of this concert were great to watch. Even though the stage wasn’t very flashy, I could tell that a lot of work went into the lighting and especially the camera work. The cinematography in this concert was phenomenal with its different angles, and surprisingly the quick cuts weren’t annoying to me. Everything was shown very well: Hoshino Gen himself, each of the band members, the crowd, the dancers, etc.

Choreography was also something very prevalent since a lot of Hoshino Gen’s songs include dancing, with the most popular example being “Koi” and its choreography. All of the dancers (from the group Elevenplay) did a fantastic job accompanying Hoshino Gen in this performance. And while Hoshino Gen himself didn’t dance along as much as I wanted him to, seeing him briefly do some moves in “Koi” or “SUN” was hype 😛

If I had to describe what this concert was like in one word, it would be “fun”. Everything about it was really entertaining and enjoyable to watch, and it’s all thanks to Hoshino Gen’s personality and the kind of music he makes. Whether it was the silly jokes that were scattered through the concert, the fun vibe, or just hearing all of these lovable songs being performed in a new way, I had an absolute blast watching this and I’d totally watch it again… and again. 🙂

And as I said, if you’re interested in watching this live concert, it’s on Netflix!

That’s all I got for today! My interest in watching more live concerts has skyrocketed recently and there are some bands/groups I’d really want to watch live now. SHISHAMO, i☆Ris, the Love Live concerts, … just gotta find some way to see them now 😛

If you’re interested in my thoughts on another live concert, it being Aqours’ First Live, click here!