A long long time ago, I wrote a post titled Why Love Live Fans Really Shouldn’t Neglect the New Project, where I discussed a little bit about the most recent school idol group in the franchise and my reasons on why μ’s/Aqours admirers should give them a chance.

That was in 2018. It’s been about a year and half since I published that post, and as I’ve been following their presence and growth throughout that period of time, I think right now is the perfect opportunity to give you a little bit of an “update” and explain (in chronological order) how they’ve changed since then… cause believe me, they’ve changed A LOT.

But before we talk about that, allow me to give you a bit of a refresher on the most recent group of school idols (although the word ‘recent’ won’t be applicable to them soon…):

The Perfect Dream Project (or what they’re now officially known as, the Nijigasaki High School Idol Club) was a brand new venture in the franchise and first announced in 2017. At the time, this particular school idol group was created to promote the upcoming release of the new mobile rhythm game, Love Live School Idol Festival ALL STARS. The group contains the traditional amount of members, nine, with three of them being chosen, by popularity poll, as the most popular among the N rarity cards in the first mobile game (the rest are original characters that were created specifically for this new project).

The funny thing about the first post I made about PDP was that I wrote it RIGHT before they were starting to actually take off as a Love Live group (more specifically September 1st, 2018). Prior to publishing that post, not much was going on for them other than knowing a little bit of each character’s backstory/personality, the voice actresses were introduced and started participating in various online/radio events, and only a few solo song previews were released. But when November rolled around, that’s when everything changed for the new group.

November 10th, 2018: NijiGaku (that’s what I’m gonna call them from now on) holds their very first concert in Odaiba, Tokyo (where their school is based in) and performed their first song as a group, “TOKIMEKI Runners”. This certainly allowed us to get a first glimpse at the seiyuu’s vocal and dance abilities, in a live concert atmosphere (which was pretty good, from what I heard).

November 21st, 2018: The group releases their first major album, TOKIMEKI Runners, which includes the group song and nine solo tracks from each character. And for their debut, it was pretty damn impressive. The fans got a better glimpse of the characters’ personalities and the vocal abilities of each seiyuu, as a lot of the solo tracks became memorable hits. Songs like Emma’s “Evergreen” with its unique instrument direction, Karin’s EDM-centered track “Starlight” (which kinda became a meme at one point lol), and especially Setsuna and her incredible performance in “CHASE!”; I think it’s safe to say that NijiGaku and their solo tracks got a very positive reception among the fans.

January 31st, 2019: The Love Live staff announces that there would be a fan election to vote for the three sub-unit combinations. What’s different about this from the past subunit polls was the format of each unit; traditionally it’s been a “3-3-3” format (three units with three members each) but this time, they switched it up into a “2-3-4” format. It was strange at first, but it worked out in the end.

March 30th, 2019: NijiGaku holds a mini-concert, the Kounai Matching Festival, where they all perform their respective solo songs for the first time, as well as sing “TOKIMEKI Runners”. Not only did we finally hear the live versions of the solo songs, but we also saw their individual outfits!

April 30th, 2019: Subunit voting results come out, as combination E with Karin/Ai, Ayumu/Shizuku/Setsuna, and Emma/Kanata/Rina/Kasumi wins. Next poll would be what the subunits should be named!

June 17th-July 10th, 2019: Voting election for who would be the headliner for NijiGaku’s first live concert begins. Yuki Setsuna ends up winning.

August 30th-September 1st, 2019: NijiGaku (alongside Aqours) gets the opportunity to perform at Anisama, the biggest anisong event of the year. This is also where Oonishi Aguri (voice of Ayumu and leader of the group) met her favorite idol, Ogura Yui.

September 26th, 2019: Love Live School Idol Festival ALL STARS, the long-awaited mobile game sequel, releases in Japan. We finally get a legitimate narrative about the group and its origins within the game’s story mode.

October 2nd, 2019: NijiGaku’s second album Love U my friends releases, which includes another group song and nine more solo tracks. Other than getting some more NijiGaku content/songs, I personally believe we got to see some major improvements with their singing abilities. 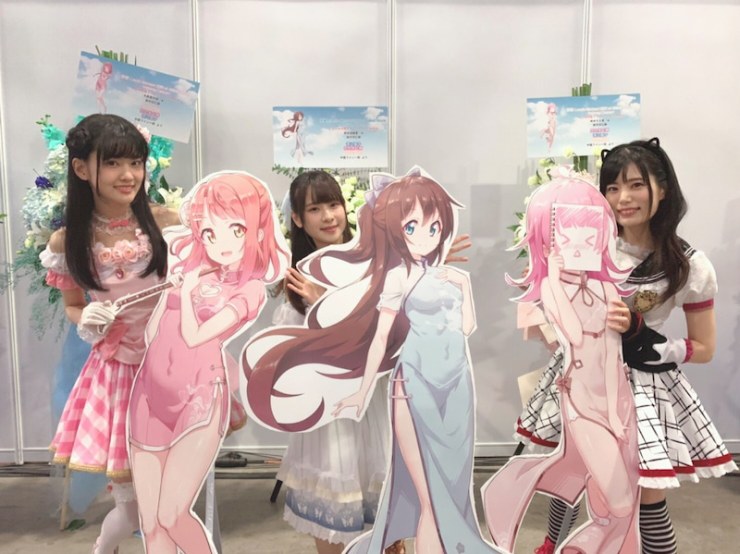 November 29th, 2019: Nakasu Kasumi wins the solo single/PV voting. This was a HUGE upset, given that Setsuna constantly won monthly popularity polls and we all kinda expected her to win lol

December 14th-15th, 2019: NijiGaku holds their first major live, First Live “with You”, at the Musashino Forest Sports Plaza in Tokyo. Here, the group performed every song they’ve released at that point, as well as debuted their first set of coordinating outfits for the “Love U my friends” song. And most importantly, it was announced that a brand new anime project revolving around the Nijigasaki High School Idol Club is in development, pretty much making NijiGaku the official successor of Aqours. 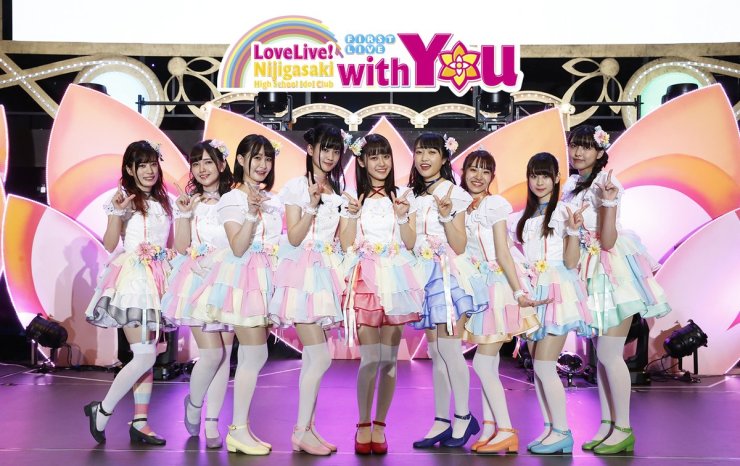 January 18th-19th, 2020: We’re in the new year now. Love Live Fest, the ultimate Love Live event/concert where all four groups (yes, including μ’s and Saint Snow) came together to perform a bunch of songs, takes place. NijiGaku got the opportunity to perform on the same stage as their senpais. They also were in agreement that Komiya Arisa (voice of Aqours’ Kurosawa Dia) was insanely beautiful.

January 28th-29th, 2020: Quick background info; in the story of LLSIF ALL STARS, the protagonist and Ayumu’s childhood friend (unofficially nicknamed “Anata-chan”) is supposed to be portrayed by the player themselves. On the 28th, a fan voting poll was started in order to determine what exactly the protagonist’s name should be. Also, the first visual for the anime was released and confirmed that Anata-chan will appear in the show.

January 31st, 2020: After some speculation following her appearance in the ALL STARS story, up-and-coming seiyuu Hondo Kaede is officially revealed to be the voice of Konoe Kanata’s sister, Haruka. She will most likely appear in the anime.

February 12th, 2020: Subunit singles are released. They are fire. QU4RTZ’s songs are probably my favorite. I’m also not really sure why a lot of people don’t like A • ZU • NA’s tracks.

April 12th, 2020: Following a livestream of the NijiGaku mini-concert from March 2019, a boatload of NijiGaku news was announced, including the first look at Kasumi’s solo song. It is titled “Muteki-kyuu Believer” and will be produced by well-known Vocaloid artist DECO*27. It was also confirmed that NijiGaku would hold their second major concert in September, but may be postponed due to the COVID-19 outbreak.

Aaaaand that’s pretty much it, for now! (also thanks to multiple sources for additional info, but most notably this reddit post)

Other than popularity polls and minor stuff like the group performing at a Lantis event, this is pretty much everything NijiGaku has been involved in since that last post I wrote about them.

There is one thing I want to add, though. I find it interesting that, unlike the previous Love Live generation, each of the voice actresses in this idol group are doing other, unrelated work while at the same time being involved in this franchise. Instances such as Kito Akari (voice of Kanata) being featured in many anime including the wildly popular Kimetsu no Yaiba, Kusunoki Tomori (voice of Setsuna) doing anime/radio work and even starting her individual music career, or even Oonishi Aguri and Sagara Mayu (voice of Kasumi) joining another idol group, Prima Porta; it seems like the VAs got a lot more freedom regarding jobs when they got casted. Maybe it was because they were just something on the side while Aqours is still in the spotlight, but it’s pretty impressive that they can balance being in such a busy franchise and doing other work.

If you haven’t been keeping up with this particular group or you’ve been meaning to learn more about them, I hope this post was somewhat informative to you. They’re a group with a ton of potential and this is only the beginning for them. Also, at the time of this post’s release, it’s Sagara Mayu/Mayuchi’s birthday! HBD to her! 🙂